The Federal Government, through the National Council on Privatisation, has sacked the concessionaire in charge of the Lagos International Trade Fair Complex over the non-remittance of lease fees totalling N6bn.

As stated in the termination letter issued by the NCP, the concessionaire, Aulic Nigeria Limited, had breached the agreement it signed in 2007 with the Federal Government.

According to the letter, the illegalities perpetrated over the years by the concessionaire vary from the non-remittance of the lease fees to the alleged eviction of the management board from the administrative building, among others.

The letter stated that the NCP terminated the concession agreement on August 23, but took some time to implement the decision due to logistics and security reasons.

The Inspector General of Police, Ibrahim Idris, had on November 20, issued a directive that the concessionaire be evicted from the complex and this was smoothly carried out.

According to the termination letter, the management board, headed by the Executive Director, Lagos International Trade Fair Complex, Mrs. Lucy Ajayi, was directed to take possession of the complex from the concessionaire.

Speaking at a press conference in Lagos on Tuesday, Ajayi said the board would now be able to perform its statutory function and move the complex to greater heights.

Ajayi, while addressing the shop owners, assured them that they were in an era of new change, stating that the management board would do its best to ensure that their interests were taken into consideration.

“I want to thank you all for your perseverance and endurance during those trying periods. I use this medium to assure you that all those injustices meted out to you in the time past are over,” she said.

The Chairman, Stakeholders Forum, Lagos International Trade Fair Complex, Mr. Jude Okeke, described the takeover by the management board as a re-birth for the complex.

According to him, by design, the management board is supposed to be the landlord of the complex, overseeing all the activities within and around it.

“We have been in the wilderness for a long time and this has caused a lot of losses in financial, trade and other aspects,” Okeke stated. 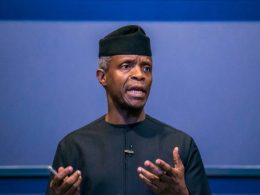 Every Civil Servant deserves to live in their own home – Osinbajo

Vice President, Yemi Osinbajo, has called for a reform of the Nigerian Civil Service and in order to achieve that “we need to do something bold and big that will make a difference.
byLateef Idris
No comments

Two suspected members of a robbery gang that had been terrorizing commuters along Agboju/Alakija, Two/Badagry expressway, Lagos, have been arrested by policemen attached to satellite division.
byLateef Idris
No comments