Why Psychological abuse is worse than physical

A Clinical Psychologist, Mr Adedotun Ajiboye, has warned that emotional maltreatment could lead to serious consequences if not addressed on time.

Ajiboye, who works with the Ekiti State University Teaching Hospital, Ado-Ekiti, gave this warning in a telephone interview with our correspondent.

He said that emotional maltreatment, which could lead to emotional trauma, could either be in form of emotional abuse or emotional neglect.

‎According to him, emotional abuse is an act of commission, which could be verbal, sexual or physical, while emotional neglect is an act of omission that does not involve any physical, verbal or sexual act. ‎

‎”Emotional abuse or neglect is not seen like the physical abuse, so a lot of people may be going through it for years and nobody will know.

“It may not be until you begin to see some negative effects before‎ you realise you or someone else is going through it that is why it is very harmful.”

‎Ajiboye explained that emotional abuse and neglect could lead to fear and anxiety in the person being abused.

‎”Fear is a vital response to emotional and physical danger and if not handled properly can affect the person’s health.

He added that emotional abuse and neglect could also bring about physical health problems such as cardiovascular disease and gastrointestinal disorders.

‎“Cardiovascular disease such as high blood pressure can lead to stroke; gastrointestinal disorder could also cause ulcers‎

‎“We have what we call emotional induced ulcers that medication cannot cure,” he said.‎

The psychologist added that it could also affect the social participation of the person being abused making the person to withdraw from social gatherings.

‎He listed other effects of emotional abuse and neglect to include psychosis, tiredness, sleeplessness and loss of interest in daily activities which are signs of depression and if not treated could lead to suicide‎.

‎Ajiboye told NAN that the first step towards handling emotional abuse and neglect was to recognise that there was a problem.

He advised people being abused to always share their problems by talking to someone either a spiritual leader or medical professional.

“If the abuser is not ready to see reason, especially if it involves husband and wife, the person being abused should talk to a higher authority like a spiritual leader or medical professional. ‎

“However, getting help from a medical professional is not well entrenched in our society.”

Ajiboye said that the person being abused should also try to avoid the abusive environment, especially when the persons health is being affected.

‎He also said the person could use spiritual therapy such as listening to scriptural words of encouragement, music or meditation.

‎According to the psychologist, there are also relaxation techniques, especially if the trauma is at a minimal stage.

‎“The person could take deep breaths; hold breath for like seven seconds and breath out or before talking in response to the abuser, you can count up to 10 before responding,” he said. 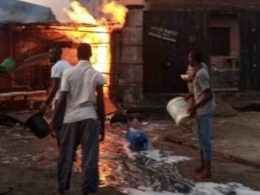 The explosion was said to have happened around 7pm on Tuesday at Iyasoko street, Agboju, Amuwo-Odofin.
byLateef Idris
No comments

Ikechukwu Ezenwa is set to be axed from Super Eagles squad for next month’s African Cup of Nations qualifiers against Benin Republic and Lesotho.
byLateef Idris
8 shares
8
0
0
No comments 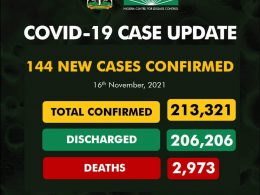 On the 16th of November 2021, 144 new confirmed cases and 5 deaths were recorded in Nigeria ﻿
byLateef Idris
No comments 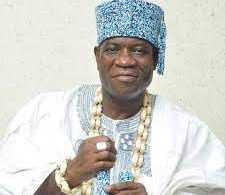 The Special Adviser to the Governor of Lagos State on Education, Hon Tokunbo Wahab has felicitated with the Adeboruwa of Igbogbo Kingdom, HRM Oba Abdulsemiu Orimadegun Kasali (Emugoriade 1) and the good people of Igbogbo on the occasion of 2021 Igbogbo Day Celebration and 5th Coronation Anniversary of the royal father.
byTayo Aderinola
No comments