The race to trace the contacts of a man who died of coronavirus in Lagos on Friday began yesterday. His coronavirus status was unknown because his friend who took him to the Lagos University Teaching Hospital (LUTH) on Thursday unconscious didn’t disclose it.

He earlier performed a coronavirus test at Yaba, according to a statement by LUTH’s Chairman, Medical Advisory Committee, Prof. Wasiu Adeyemo, which turned positive.

The statement also revealed that the victim was a diabetic hypertensive patient who had a transplant for chronic kidney disease and was on immuno-suppressant drugs.

Lagos State Commissioner for Health, Professor Akin Abayomi, described as unfortunate the news of the first COVID-19 death in Lagos but the fourth in the country.

The other deaths were recorded in Edo (one) and Abuja (two).

As of yesterday, there were 209 confirmed cases in the country spread across 13 states and the FCT with 25 patients discharged. Lagos topped the list with 109 cases.

No new cases were announced by the Nigeria Centre for Disease Control (NCDC) yesterday.

The developments on the Lagos death came on a day the Minister of Finance, Budget and National Planning, Zainab Ahmed, met with the leadership at the National Assembly on an executive proposal to establish a N500 billion COVID-19 Crisis Intervention Fund.

The LUTH statement said its Department of Community Medicine had moved swiftly to trace, follow-up and assist gallant staff who managed the deceased patient.

It further implored all LUTH staff to continue observing strict standard protocols while handling all patients as medical personnel are especially at increased risk from such undisclosed exposure.

Giving details about the incident in the statement, they said: “A man was brought unconscious to LUTH Emergency late in the evening of Thursday 02/04/2020 by his friend and although they denied any history of recent travel, his presentation strongly suggested Covid-19.

“He was handled professionally by the Infectious Diseases Consultant and his team without unduly exposing LUTH staff to danger. He died a few hours later.

“Further investigations later revealed he had earlier performed a test at Yaba soon after he returned to Nigeria from Holland and the test was positive. He was a known Diabetic Hypertensive patient. He had also had a kidney transplant for chronic kidney disease and was on immuno-suppressant drugs.

“The corpse has since been handed over to the appropriate unit of the Lagos State Ministry of Health for safe burial according to international best practices.”

The statement added that all efforts are being made to ensure the availability of all required items to continue the effective management of such cases that come to LUTH.

The management also added that efforts are also in top gear to complete the isolation facility in LUTH for management of any possible spillover from the Yaba Infectious Disease Hospital, IDH, if the surge in patients’ load continues.

Lagos State Commissioner for Health, Abayomi, described as unfortunate the news of the first COVID-19 death in Lagos.

The Commissioner, on his twitter handle – @ProfAkinAbayomi, said: “I regret to announce the first COVID-19 related death in Lagos State.’’

According to him, the deceased, a 55-year-old Nigerian male, lived in Holland and returned to Lagos two weeks ago but failed to provide full account of his travel history or medical circumstances to the attending doctors in keeping with the global trend and to enable guided treatment for COVID-19 related vulnerability due to severe underlying ill-health.

Abayomi said the patient, however, showed some signs of an upper respiratory chest infection and later tested positive for COVID-19 but died in the early hours of April 3, 2020, from cardiac arrest.

“He had a kidney transplant seven years ago and also diabetic. May his soul rest in peace”, he said.

Meanwhile, the meeting the Minister of Finance, Budget and National Planning, Zainab Ahmed, had with lawmakers was a follow-up to the one held on March 25, 2020, between the National Assembly leadership and members of the Presidential Task Force on COVID-19.

Also in attendance were the Speaker of the House of Representatives, Mr. Femi Gbajabiamila, Deputy President of the Senate, Sen. Ovie Omo-Agege; Deputy Speaker, Idris Wase, and some principal officers of both Chambers.

According to the minister, “what we are proposing is the establishment of a – N500 billion COVID-19 Crisis Intervention Fund. This Fund that we are proposing to be created will involve mopping up resources from various special accounts that the government has.’’

She added that the proposed intervention fund would also be sourced from grants being expected and loans from multilateral institutions.

“Our general view is that this crisis intervention fund is to be utilised to upgrade healthcare facilities as earlier identified. The Federal Government also needs to be in a position to improve health care facilities not only in the states but to provide intervention to the states,” she said.

Ahmed explained to the lawmakers that the Fund if approved would also take care of special public work programmes currently being implemented by the National Directorate of Employment (NDE).

Former Lagos Assembly member Lanre Odesanya has stepped down for a senatorial aspirant, Tokunbo Abiru, who has been…
byTayo Aderinola 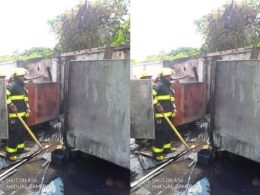 The Lagos State Fire Service has put out a Fire at the alternative power generating set of the Wema Bank branch on Joseph Dosu Way, Badagry, Lagos.
byTayo Aderinola