Five suspected fraudsters who are specialists in using taxi cab to pick unsuspecting passengers around Lekki, Lagos and later duped them have been remanded at the Ikoyi Prison, Lagos.

They were ordered to be remanded on the orders of an Igbosere Magistrates’ Court following their inabiity to fulfil their bail conditions.

The accused were alleged to have lured a housemaid, Blessing Achi to steal her employer’s box of jewellery valued at N15m for them to sell and use the proceeds to perform sacrifice on stolen $3m dollars before they could share the money, a claim the police said the accused persons knew to be false.

Others are Lucky Ikonne, 36, who lives at 7, Abimbola Street, Ogba; and Chikodi Cyril, 45, a resident of 12, Oladimeji Street, Ayobo, Ipaja, Lagos. Their alleged accomplice who was identified simply as Godwin is now at large.

Trouble started for the accused when they picked the maid on 3 May, 2018.

The maid who resides at Plot 13, Ayinde Akinmade Street, Phase I, Lekki, was going on an errand to Obalende when she fell victim of the fraudsters.

In her statement to the policemen at the Federal Special Anti-robbery Squad, FSARS, Adeniji Adele Road, Lagos, Achi stated: ”I entered a cab from Lekki roundabout with three occupants inside the car enroute Obalende for an errand for my Madam and on my way, one of the passengers who identified himself simply as Godwin now on the run suddenly started crying and begging others to help him beg the driver not to take the box containing the sum of $3m inside the car boot he stole from his employer to the police station.

”Godwin later pleaded with me to help him also beg the driver not to take the dollars to the station with a promise to give me share from the money.

”And the moment I intervened, the driver said he had changed his mind because of me and he drove us to Oyemekun, Ogba, Lagos to meet their boss, Nwogu who told us that before we could spend the money, we would need some money to perform rituals, to avoid untimely death.

‘They asked me how much I could provide from the money and I told them that I have no money because I am a housemaid.

“They later told me to go and bring my employer’s jewellery for them to sell and use the proceeds for the rituals with a promise to buy another jewellery for me to return to my employer after we shared the dollars.

“But I was shocked after I gave them the jewellery, they failed to fulfill their promise.”

Following complaint by the maid’s employer, Divine Olaiya, the police arrested Achi at a hideout and led detectives to arrest the accused persons at Ogba, Lagos.

All the accused were arraigned before an Igbosere Magistrate’s Court on a three-count charge of felony to wit conspiracy and obtaining goods under false pretence.

The accused, however, pleaded not guilty to the charge and Magistrate R. O Davies granted them bail in the sum of N2m each with two sureties each in like sum.

Davies adjourned the case till 2 June, 2018 for mention and ordered that the defendants be kept at the Ikoyi Prison, Lagos till they fulfil the bail conditions. 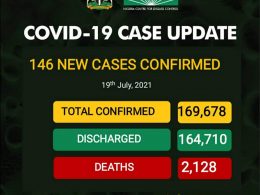 On the 19th of July 2021, 146 new confirmed cases and one death was recorded in Nigeria
byLateef Idris
No comments

President Muhammadu Buhari will leave Abuja on 28th April 2018, on an official working visit to the United…
byTayo Aderinola
No comments