The United States (U.S.) has threatened sanctions, including visa restrictions, on anyone who interferes with the democratic process or instigates violence in the 2023 general elections

The United States (U.S.) has threatened sanctions, including visa restrictions, on anyone who interferes with the democratic process or instigates violence in the 2023 general elections

U.S. also threw its weight behind the decision of the Independent National Electoral Commission (INEC) to deploy the Bimodal Voter Accreditation System (BVAS) and electronic transmission of results for the poll.

Political Counselor at the U.S. Embassy in Nigeria, Rolf Olson, gave the warning on behalf of the U.S. government at the Hubert Humphrey Fellowship Alumni Association Annual Seminar on ‘Promoting Electoral Integrity in Nigeria: Prospects and Challenges’ in Abuja yesterday.

Olson, however, maintained that U.S. does not have a candidate in the upcoming elections, while it supports all efforts to ensure the integrity of 2023 elections.

Recall that the U.S. government had imposed visa restriction on some individuals for their actions during the November 2019 Kogi and Bayelsa elections and in the run-up to the September and October 2020 Edo and Ondo elections.

Although U.S. did not reveal the identities of those who have been banned, it said the decision reflects its commitment to strengthening democracy in Nigeria.

On the 2023 elections, Olson said: “The United States does not support any individual candidate or party in this election cycle. Our interest is in supporting credible and transparent elections that reflect the will of Nigerian voters, in a process that is conducted peacefully. Full stop.

“Individuals seeking to undermine the democratic process, including through violence, may be found ineligible for visas to the United States. We have imposed visa restrictions in the past against those responsible for, or complicit in, undermining the democratic process, and remain fully willing to do so again in the context of the upcoming elections.”

He advised parties, candidates and their supporters to avoid language that tries to “guarantee” victory, adding that there is no true democratic election in which the outcome is foretold.

INEC National Commissioner and Chairman, Information and Voter Education Committee, Festus Okoye, disclosed that 176,846 BVAS would be deployed to all polling units in the country, adding that the Commission will make available at least two BVAS devices as backup to each of the 8,809 registration areas.

While lamenting that the Commission’s platforms were always subject to attacks by political actors and faceless individuals and groups using hackers, Okoye said INEC is faced with the huge challenge of protecting its platforms and assets ahead of the general elections. He assured that INEC’s data recovery centres will be upgraded and all its platforms enhanced.

Okoye urged Nigerians to be vigilant by protecting their votes on election day, adding that INEC is firm on its resolve to conduct free, fair, transparent and inclusive elections.

“The Commission will continue to be open and transparent in its technological innovations because election business is public business and the public has a right to know what the Commission is doing.”

Also, INEC has vowed to punish officials involved in the infractions and registration of underage voters during the last Continuous Voter Registration (CVR) exercise. The Commission, however, maintained that proof of underage and multiple registrations in its preliminary voter register is “commitment to transparency.”

Okoye said the Commission cannot rule out infractions by its registration officials in allowing these ineligible persons into the register in the first place.

Vice president of the Hubert Humphrey Fellowship Association and immediate past head of Publicity Division of INEC, Andy Ezeani, who moderated the seminar, paid tribute to the U.S. government for establishing the fellowship.
INEC, at the end of its Automated Biometric Identification System (ABIS), yesterday, identified 2,780,756, as the number of ineligible registrants in Kano State.

The new Resident Electoral Commissioner (REC) in Kano, Zango Abdu, during a meeting with election stakeholders, said the preliminary register of voters in Kano currently stands at 5,927,565.

“It is preliminary because Section 19 (1) and (2) of the Electoral Act 2022 requires the Commission to display the hard copies of the register of voters for each registration area (Ward) and Local Government Area (and simultaneously publish the entire register on the Commission’s website) for a period of two weeks for scrutiny, claims and objections, by citizens not later than 90 days to a general election.”

Also, the REC reiterated that the Commission, as mandated by law, would continue to monitor the activities of political parties, as well as track the campaign finances of all political parties as provided by Sections 83, 85, 87, 88, 90, 91,92 and 95 of the Electoral Act of 2022.

To this end, he urged politicians to critically study and pay attention to the provisions of the Constitution, Electoral Act, Police Act and Public Order Act for the proper and peaceful conduct of political party campaigns, rallies and processions.

Similarly, the REC stressed that there would be no going back on deployment of Bimodal Voter Accreditation System for voter accreditation and the transmission of results to the INEC Result Viewing Portal on Election Day.

MEANWHILE, the Inspector-General of Police (IGP), Usman Alkali Baba, flanked by members of Nigeria’s intelligence community, have warned political parties and governors against the use of thugs to disrupt political activities and rallies of opponents in their states.

The IGP gave the warning at the police headquarters, Abuja, yesterday, while addressing political parties, INEC and other electoral stakeholders.

According to the IGP, the meeting was urgently convened to discuss issues of electoral violence and other negative tendencies identified within the electoral process following the commencement of political campaigns, which constitute potent threats to the elections.

The meeting, which was chaired by the IGP, had in attendance chairmen and representatives of 17 registered political parties, INEC Chairman who was represented by Mrs. May Agbamuche-Mbu; Director-General, National Intelligence Agency, Mr. Ahmed Rufai Abubakar; Chief of Defence Intelligence, Maj. Gen. S.A. Adebayo; Director-General, Department of State Services, represented by Director of Operations, Mr. Joseph Dashwip.

The police boss noted that so far, about 52 cases of political violence have been recorded since the commencement of campaigns in late September. While warning that the police will not hesitate to address the emerging problem, he urged politicians to desist from violence.

“Political violence manifest in three forms. First is violence that is targeted at INEC personnel and assets as recently witnessed in Ogun and Osun states. The second form is inter-party intolerance and violence, which often become particularly pronounced during campaigns, elections and post-elections phases.

“In so doing, they deploy their powers and influences to either prevent the mounting of campaign billboards or pull them down, while also denying political opponents of spaces to undertake their campaigns or peaceful political congregations in contravention of the provisions of the Electoral Act 2022 (as amended),” the IGP stated.

A CHIEFTAIN of Labour Party (LP), Prof. Pat Utomi, has lamented the non-distribution of Permanent Voter Cards (PVCs) in INEC coffers, alleging that at least 9.3 million of such cards are lying idle in the Commission’s offices.

Utomi stated this yesterday when he, alongside the chief spokesman of the Peter Obi/Datti Ahmed Presidential Campaign Council (PCC), Dr Tanko Yusuf and others led an advocacy walk to INEC headquarters under the aegis of the ‘Big Tent.’

Utomi, who is leader of the National Coalition Front (NCFront) and convener of the Big Tent, a coalition of political parties, social movements and Civil Society Organisations (CSOs) urged INEC to decentralise the process of PVC collection and if possible, take the cards to the doorsteps of Nigerians.

He queried the necessity of having PVC as a requirement for voting, saying with biometric authentication of a potential voter, there was no need to have a physical card.

Receiving the petition on behalf of INEC, an Assistant Director at the headquarters, Kelechi Maduneme, said the Commission does not have the capacity to distribute PVCs, stating that Nigerians have to go to their respective INEC local government offices across the country to collect the cards.

“It is the responsibility of every registered voter to go and collect their PVC. A lot of PVCs have been printed and as we speak, the Commission has commenced the display of the temporary register of voters. So, every Nigerian has the opportunity to visit the polling units to check their details.” 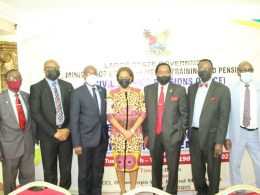 The Lagos State Civil Service Pensions Office, in collaboration with MOC Consulting Limited, recently held a pre-retirement workshop, tagged “Entrepreneurial Life After Retirement”, for civil servants about to exit the service at the Lagos Chamber of Commerce and Industry (LCCI), Ikeja.
byTayo Aderinola
No comments 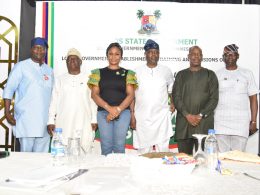 The Local Government Service Commission (LGSC) and the Local Government Establishments, Training and Pensions (LGET&P) jointly organised a one-day management retreat for staff at the Celebration Gardens International, GRA, Ikeja, Lagos, to increase their level of professionalism and effective discharge of duties.
byLateef Idris
No comments