Members of a five-man gang of kidnappers, which in­cluded a lady, have con­fessed how they lure vic­tims to their untimely death, swindle others through online dating using a website known as Tinder.

Members of a five-man gang of kidnappers, which in­cluded a lady, have con­fessed how they lure vic­tims to their untimely death, swindle others through online dating using a website known as Tinder.

They revealed that they lure vic­tims to lonely spots where they attack and rob them of their valuables.

According to their confessions, the unfortunate ones would be killed ei­ther by strangling or shot to death to cover-up their tracks.

Men of the Force Intelligence Re­sponse Team led by Abba Kyari, a Dep­uty Commissioner of Police (DCP), arrested them recently.

Their arrest came a few days after the family of one of their victims, Michael Victor, reported that he (Mi­chael) was missing.

Saturday INDEPENDENT gath­ered that on 12th January 2021, the family of the deceased reported to IRT that their son has been missing since 6th January 2021.

It was revealed through intelli­gence gathering and support of the Technical Intelligence Unit, Force Headquarters Abuja, Eneji Michael a.k.a. General, and two of his gang members were arrested.

It was revealed that one AK-47 rifle, three magazines tied together and loaded with eighteen rounds of live ammunition was recovered from them.

During the interrogation by op­eratives, the suspects confessed to have killed the victim the very day they kidnapped him and later led the operatives to Old Onne Road Rivers State where on getting to the forest, it was discovered that the Divisional Police Officer (DPO) in-charge of the jurisdiction had already recovered the corpse and deposited same at Okirika General Hospital Mortuary.

Confessing to the crime, the al­leged ringleader, Eneji a.k.a General, a native of the Gakem community in Bekwara Local Government Area of Cross River State said, “I have been into kidnapping and armed robbery since 2011 immediately I got my Bach­elor’s degree in Business Administra­tion.

“I have been operating under the cover of being a naval officer, whereas I am not. I tell people that I am naval personnel because they see me put­ting on fake Navy uniforms most of the time.

“We normally pose as women on most of these dating sites. As soon as we lure our victims, we will arrange for a meeting. If the target becomes very stubborn we will bring a lady member of our gang who will speak with the man.

“If the man still insists on seeing the face of the lady, we go on video chats. We also use a small Tecno phone that enables us to change our voice from a man’s voice to a woman’s voice. Once I have been able to establish a contact, I will go to the next stage, which is to convince them that I will satisfy their sexual urge.

“Pretending to be a girl, I will tell them to meet me at Conoil Filling or Nyelek Filling Station, before Trailer Park on Eleme Road, while one of my boys, Success will go there and meet them as my domestic servant and di­rect them to my house.

“To convince them to come, I will claim that I live in a mansion where I don’t like disturbance. Once they start coming, Success will now tell them to drive towards a deserted place where we will lay an ambush, dressed in army uniform, and will stop them, overpower them and tie their hands and legs, while we take their valuables such as ATM cards,” he added.

According to him, the work of Abubakar and Otuma was to tie the victims, while Emeka handles the AK- 47 in case of any attack, as he goes to the bank to withdraw whatever the victims have in their bank accounts.

The Special Adviser to the Lagos State Governor on Tourism, Arts and Culture, Mr. Solomon Bonu, has said…
byTayo Aderinola

The Federal Government, in collaboration with the Lagos State Government, has commenced the payment of Conditional Cash Transfer…
byLateef Idris

Lagos HoS, others harp on effective use of technology for Learning

The Lagos State Head of Service (HoS), Mr. Hakeem Muri-Okunola, the Commissioner for Education, Mrs. Folashade Adefisayo and the Tutor-General/Permanent Secretary of Education District III, Dr. Yinka Ayandele have underscored the need to leverage technology and innovation as a way of engaging students in teaching and learning in the State's public schools.
byLateef Idris 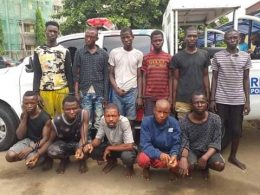 The police operatives attached to the Rapid Response Squad of the Lagos State Police Command, between Friday 29th and Saturday 30th January, 2021, arrested 13 suspected traffic robbers in Oshodi and Ketu (Alausa) areas of the state, as it intensifies efforts in mopping up criminals suspected to be attacking motorists and commuters in traffic.
byTayo Aderinola