Vice President Yemi Osinbajo has stressed the need for a strong and effective dispute resolution mechanism for economic growth and investment in Africa.Osinbajo, represented by Senior Special Adviser to the President on Trade and Investment, Dr. Jumoke Oduwole, said this yesterday in his opening remarks at the Third International Court of Arbitration conference with the theme “Viability of Arbitration in Africa, Thinking Globally, and Acting Locally” in Lagos organised by the International Chamber of Commerce (ICC).

He said: “The existence of a strong and effective dispute resolution mechanism is a crucial driver for economic growth and investment in Africa.“Investors, whether domestic or foreign, look beyond pure economic fundamentals to require assurance for effective legal frameworks for enforcement of awards and a credible judicial system, which gives them a reasonable level of comfort and confidence.

“Nigeria is fast becoming a leading seat of arbitration and settlement of investment dispute between contractual parties.“The current administration has been focused on delivering on economic growth in Nigeria. The Economic Recovery and Growth Plan (ERGP) was drawn to keep the economy on the path of sustainable economic growth and global competitiveness.”

“Therefore, ICC needs to do more to enhance its position as the foremost worldwide trade organisation, by championing issues of diversity and regional representation in the arbitration community.”Besides, he said there was provision for the establishment of a Dispute Settlement Body (DSB) in the recently executed AFCFTA, which was adopted and signed by 44 African Union (AU) countries in March.

He said that the DSB provides a bespoke arbitration mechanism for dispute resolution through agreed rules between state parties to the agreement.The vice president, who commended the Chief Judge of Lagos State for establishing the Small Claims Court for the state in April, said Lagos State judiciary collaborated with the Presidential Enabling Business Environment Council (PEBEC) towards creating an enabling business environment for Nigeria.

Osinbajo, who noted that if we have a strong legal framework for arbitration, including judicial reform which PEBEC could drive, there would be increased Foreign Direct Investment as a country and as a region.He, therefore, urged other members of the arbitration committee in various African jurisdictions to replicate same with similar governmental bodies in their home states or engage government directly like Nigerian Arbitration Community by pushing hard for arbitration reforms. 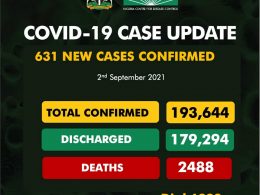 On the 2nd of September 2021, 631 new confirmed cases and 8 deaths were recorded in Nigeria
byLateef Idris
No comments