Lagos At 50: The legal validity of Soyinka’s appointment

(Being the address delivered by Femi Falana at the public presentation of Kayode Fabunmi’s book on THE STORY OF A GIANT  in Lagos  on April 12, 2016)

I wish to join others in congratulating Mr. Kayode Fabunmi for his timely book on THE STORY OF A GIANT. Since the book has rightly touched on the migration caused by the slave trade and colonialism it is pertinent to join issues with a segment of the political elite which has decided to follow the shaky footsteps of Mr. Donald Trump by attempting to constrict the democratic space in our country. I crave the indulgence of the audience to contribute to the  diversionary debate over the constitution of a committee set up by the Lagos state government to supervise the activities lined up to mark the 50th anniversary of the creation of Lagos state.

It is common knowledge that Professor Wole Soyinka’s parents were from Ogun state. His father hailed from Isara, an Ijebu community while his mother was an Egba woman. Even though ours is a patriarchal society, the Nobel Laureate has always described himself as “Ijegba”, a word coined by him from his Ijebu and Egba roots. However, the Ijegba man has lived in Lagos and made it a home like many Nigerians and foreigners alike. As a young lecturer he taught briefly at the University of Lagos. On account of his involvement in the struggle for social justice he has read poems and delivered speeches in Lagos to arouse the Nigerian people to fight tyranny and oppression. He has also held press conferences and led protests on the streets of Lagos against the dictatorial tendencies and excesses of the civilian and military wings of the bourgeois ruling class.

To stop the carnage on our poorly maintained roads he inspired a group of road safety corps of volunteers to manage a chaotic traffic situation in the country in the 70s. The federal government bought the concept and set up the federal road safety commission. In adopting the programme the Bola Tinubu administration established the Lagos State Transport Management Agency (LASTMA). But for the strident opposition of a group of artists led by Professor Soyinka against the planned privatisation of the National Theatre at Orile Iganmu in Lagos the edifice would have been sold to a business tycoon who might have converted the historical monument to a shopping mall.

Several years ago, the Lagos state government had rightly acquired the site of the colonial prison along Broad street in Lagos for a public purpose. As the government was thinking of what to do with the site it was Professor Soyinka who convinced the Babatunde Fashola administration to turn it into a centre for the promotion of arts and culture. The beautiful arts theatre erected by the state at the site is now known as the Freedom Park. The theatre which is patronised by local and foreign artists has become a popular entertainment centre in Lagos state. In spite of his very busy schedules Professor Soyinka superintends the management of the theatre. Characteristically, he has added value to the Freedom Park and enhanced its image.

Having regard to his enormous contributions to the development of Lagos state Professor Soyinka’s appointment as a co-chair of the 50th anniversary committee of the creation of the state by Governor Akin Ambode was hailed in many circles. However, it has not gone down well with the members of the “Eko Foundation” who have said that the temporary appointment ought to have been allocated to an indigene of Lagos state. Incidentally, the press release issued by the group was jointly signed by two senior lawyers-Professor Wole Smith, SAN and Kunle Uthman. While appreciating the primordial sentiments expressed by the group in the context of the country’s politics of exclusion it is pertinent to examine the legal validity of the appointment.

Since the people of Nigeria are entitled to residency rights the discriminatory treatment meted out to non-indigenes and settlers in many parts of the country cannot be justified in law. In Lafia Local Government v. The Executive Governor, Nasarawa State & Ors (2012) 17 NWLR (PT 1328) 94. The Supreme Court struck down a policy of the Nasarawa state government which required all local government staff to serve in their local governments of origin. In the leading judgment of the court  Rhodes Vivour J.S.C. said that the policy was “discriminatory and unconstitutional and clearly offends the provisions of section 41 (1) which guarantees freedom of movement and section 42 (1) which guarantees the freedom from discrimination. It is contrary to the spirit and intendment of relevant sections of the Constitution”.  In his contribution to the judgment Fabiyi JSC also stated that “the policy infringed and/or eroded the constitutional rights of the 3rd-36th respondents relating to discrimination, ethnicity and place of origin syndrome. That should not be the position in a democratic setting guided by fundamental human rights as duly imbued by the Omnipotent”.

By the combined effect of sections 14 and 15 of the Constitution the Nigerian State is required to promote national integration and protect the residency rights of citizen while the government or agency of a state government shall be constituted in such manner as to promote a sense of belonging and the diversity of the people. Although section 147 of the Constitution provides that every state in the federation shall be represented in the federal cabinet by any indigene there is no such requirement at the state level. In other words,  it is not stated in the  Constitution is that members of the executive, judicial and legislative arms of a state government shall be constituted by indigenes alone. Therefore, the appointment of Professor Soyinka by Governor Ambode has not violated any law.

Since every citizen is entitled to residency rights it is submitted that the authorities of local governments are under a legal obligation to accept as an indigene every person who decides to live in any community other than their place of origin. In other words, Nigerians citizens who have chosen to reside outside their states or local governments of origin are entitled to be fully assimilated into the way of life of their place of residence. In Director-General, State Security Service v. Olisa Agbakoba 1999) 3 NWLR (PT 595) 314.  the Supreme Court upheld the right of Nigerian citizens to reside in any part of the country when it held that “It is not in dispute that the Constitution gives the Nigerian citizen the right to move freely throughout Nigeria and to reside in any part thereof.”

In view of the clear provisions of Section 42 of the 1999 Constitution it is undoubtedly clear that  discrimination meted out to a Nigerian citizen on the basis of ethnicity or place of origin is unconstitutional. In order to end the dichotomy of indigenes and settlers in the country, not a few people have suggested that the rights of an indigene be conferred on any settler who has resided in any community in Nigeria for a period of not less than 10 years. The suggestion flies in the face of sections 41, 42 and 43 of the Constitution which have guaranteed the fundamental rights of every Nigerian citizen to move freely throughout Nigeria, reside, own and acquire property in any part thereof and not to be subjected to disabilities or restrictions on account of their ethnic group or place of origin.

By way of digression, permit me to recall an interesting experience. I was in Nairobi, Kenya to attend an international human rights conference in 2008 when Mr. Barrack Obama had just been elected as the President of the United States of America. Since his father was a Kenyan, Obama’s election was celebrated all over the country. Even the then Kibaki regime which had annulled the result of the presidential election in the country declared a national holiday to celebrate Obama’s election. In the course of reviewing the American election I was compelled to ask some of my Kenyan friends if Barrack Obama could have won a presidential election if he had contested in Kenya. All the friends were unanimous in saying that it would have been impossible since his father was of the Luo tribe, a minority  ethnic group in Kenya.

Regrettably, the political class in each of the African countries has failed to draw any lesson from Obama’s election. Hence, African politicians have continued to campaign and woo voters on the basis of ethnicity and religion to the detriment of development. As a centre of excellence Lagos cannot continue to live in the past.  Because of its cosmopolitan nature Lagos cannot afford to play the politics of exclusion. To that extent, the appointment of Professor Wole Soyinka as a co-chair of the 50th anniversary committee  cannot be said to be anomalous in any material particular. 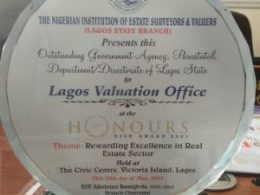 The Lagos State Valuation Office (LASVO) has been honoured as the Most Outstanding Government Agency by the Nigerian Institution of Estate Surveyors and Valuers (NIESV).
byTayo Aderinola
1 share
1
0
0
No comments

Omolola Essien felicitates with COS Tayo Ayinde at 56

The Lagos State Police Command has rescued one abandoned day old boy on Monday 15th March, 2021 at about 1030pm.
byLateef Idris
No comments

The Special Adviser to the Lagos State Governor on Housing, Mrs. Toke Benson-Awoyinka, on Thursday, met with stakeholders and…
byLateef Idris
No comments