Jonathan and his wife, Patience, welcomed the elder statesman who was in their home for a private dinner.

Earlier before the visit, Obasanjo inaugurated a government specialist hospital in the state and unveiled the Bayelsa Heliport which was renamed after the first military administrator of the defunct Rivers State, Alfred Diete-Spiff.

Upon his arrival in Bayelsa, the former president was received by the state governor, Seriake Dickson, in company with some top government officials in the state.

Obasanjo, on Friday, commended Gov. Seriake Dickson of Bayelsa for embarking on projects that would improve the overall development of the state and the people.

He said the centre was built according to international standard and would assist in improving health care delivery to the people.

He added that “20 years ago when I came to Bayelsa for campaign, there was no space to gather people, but today, there is great difference.

“Yes, for full development to take place in Bayelsa, there must be accessibility in terms of transportation, communication and health care delivery.

“I must tell you, for six hours I am here, I have seen something to convince me that Bayelsa is already in transformation stage.

“The health facility here is second to none.”

He gave the advice during an interactive session with the students in Kaiama, Kolokuma/Opokuma Local Government Area of Bayelsa, on Friday.

The News Agency of Nigeria (NAN) reports that the former president was in Bayelsa, to commission some projects to mark Governor Seriake Dickson’s six years in office.

During the interactive session, the former president said that after food and health, the next was education.

Obasanjo, said a leader without vision would not go anywhere, because that is vision that drives a good leader.

“The foundation of any human mind is education. A leader who does not give his people quality education, will perish with his people.

“The root cause of militancy is lack of education, if you don’t build schools, that means you have to prepare for unstable society.

“The only investment that lasts and that does not need repair is education.

“My childhood was very rough, I never had the opportunity most of you have now, as students of Ijaw National Academy,’’ he said.

Earlier, Gov. Dickson said the diagnostic centre was part of his promises to the people of Bayelsa.

Dickson reiterated his administration’s readiness to continue to work to uplift the healthcare delivery in the state.

He said the uncompleted 500-bed hospital initiated by previous administration would be given a face lift in the next fiscal year.

“We will complete the project before the end of my tenure,’’ he assured.

The Commissioner for Health, Prof. Ebitimitulah Etebu, said the centre was capable of taking care of the diagnostic needs of people in the state.

He added that “the diagnostic centre would handle screening of blood, radiology and the result transmitted electronically to international partners in America.”

The Lagos State Planning and Environmental Monitoring Authority (LASPEMA) has reiterated the present administration's zero tolerance for all environmental infractions across the metropolis by serving contravention notices to some informal business owners along Olayinka Bamgbose Street and Unity Road in Ikeja Local Government.
byTayo Aderinola
No comments

It was in 1974 that the news broke. Chief Bolarinwa Abioro, the Balogun of Ipokia, the Chairman of…
byTayo Aderinola
No comments

Justice Ijeoma Ojukwu of the Abuja Division of the Federal High Court on Thursday declined to revoke the bail she earlier granted to the convener of the #RevolutionNow movement, Mr Omoyele Sowore.
byLateef Idris
No comments 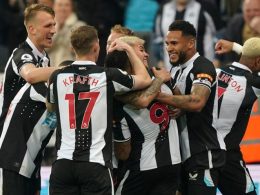 Arsenal’s exile from the Champions League looks set to stretch into a sixth season after losing 2-0 at Newcastle on Monday.
byLateef Idris
No comments