LAGOS – The Federal Government has once again been called upon to release Nnamdi Kanu, the leader of the In­digenous People of Biafra (IPOB) who was re-arrest­ed outside the country in June.,

LAGOS – The Federal Government has once again been called upon to release Nnamdi Kanu, the leader of the In­digenous People of Biafra (IPOB) who was re-arrest­ed outside the country in June.

This is as the government was warned against the destruction of the South-East through the shoot at sight order by President Muhammadu Buhari.

Prince Ugoeze Okoronkwo, the President, Kingdom Con­sulate International (KCI) Glob­al in a statement to journalists urged the government to imme­diately release Kanu from the Department of State Security (DSS) detention, warning that if anything untoward happens to him the aftermath would be catastrophic for the country.

Okonkwo, based in the Unit­ed States of America (USA) emphasised that the continuous incarceration of the IPOB leader on treason, incitement of crisis and management of unlawful society were false and could not be defended in the international community.

He insisted that the abduc­tion of Kanu contravened the Human Rights Charters of the United Nations Organisation (UNO) and African Union (AU), maintaining that since his ab­duction, the DSS had refused to send him to Kuje Correctional Facility, which he described as the impartial statutorily man­dated establishment for his cus­todianship.

“I have never seen where an accused person whose matter is already in court still remains in the hands of his accusers, pending the determination of his case by a court of competent jurisdiction.

Seventeen Northern states and the Federal Capital Territory , as well as three southern states , namely Ekiti , Ondo, and Ebonyi have signed up for the National Livestock Transformation Programme.
byTayo Aderinola

On the 26th of December 2020, 829 new confirmed cases and 1 death was recorded in Nigeria Till…
byLateef Idris 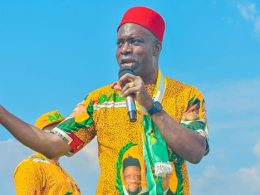 Anambra Decides: Why I Voted Against Myself

The governorship candidate of the African Democratic Congress (ADC) Akachukwu Nwankpo revealed shortly after casting his ballot in the supplementary election going on in Anambra State to elect a new governor that he voted against himself.
byTayo Aderinola