Lagos State Commissioner for Establishments, Training and Pensions, Mrs. Ajibola Ponnle, has applauded the nine Public Officers selected for the AIG Public Leaders Programme, an initiative of the Aig-Imoukhuede Institute, for making the State proud.

Lagos State Commissioner for Establishments, Training and Pensions, Mrs. Ajibola Ponnle, has applauded the nine Public Officers selected for the AIG Public Leaders Programme, an initiative of the Aig-Imoukhuede Institute, for making the State proud.

Mrs. Ponnle commended the beneficiaries, who visited her office to express appreciation to the State Government, explaining that the officers were chosen from a pool of over 600 people working in Nigeria’s public service to participate in the inaugural programme.

While noting that the nine Public Officers from Lagos State constituted about 20 percent of the final selection of 50 participants from all public sectors across the country, the Commissioner described the feat as a testament to the quality of Civil Servants in the State.

In her words: “The Lagos Public Officers constituting about 20 percent of the total selection is not tokenism, but a well-deserved effort and the acknowledgement of the calibre of our workers”.

She gave an assurance that the State Government will provide further support for the beneficiaries to excel and maintained that the training and self-development experience cannot be taken away from them, saying “You will be noted, noticed and recognised. All you earned will change you and at the end of the day it will put you in a position that will give you the opportunity to improve on the system”.

The AIG Public Leaders Programme, created by the Institute in partnership with the Blavatnik School of Government, University of Oxford, offers Senior Public Servants an immersive executive education experience aimed at strengthening the skills needed to build cultures of excellence, effectiveness and integrity throughout the institutions they lead. 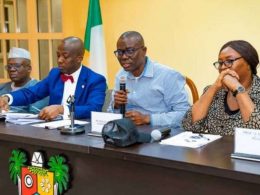 Lagos State Government has inaugurated a six-member Governing Board for Alternative High School for Girls In Aboju area of the state.
byLateef Idris