The Coalition of other APC Presidential Aspirants has asked President Muhammadu Buhari to reject the sponsorship of his nomination form for the 2019 presidential election by a group of supporters, saying it belies the anti-corruption position of his administration.

The group is also asking that the N45 million requirements for obtaining nomination form be scrapped as it fundamentally contravenes section 90 of the electoral law, encourages corruption, and narrows the chances of unscrupulous Nigerians interested in the presidential race.

Charles Udeogaranya who spoke at a press conference in Lagos said aggrieved aspirants will not hesitate to conduct an independent primary election should the party remain insensitive to their concerns.

Udeogaranya also stressed that the party would only be paying lip service to the not-too-young run bill if it pegs the nomination form at such a rate.

He said: “It is not enough to proclaim one thing and be doing another. Though some aspirants can afford the exorbitant cost of the forms, such amount is clearly not affordable to many others, including President Buhari and particularly the youths and women of our great party, APC. We have decided to take the bull by the horn and save it from a dangerous path. We must provide quality leadership which is now a very costly commodity in the Nigerian political cycle.”

A member of the coalition, Dr. SKC Ogbonnia in his contribution said lack of policy implementation was one of the challenges confronting the country which must be addressed for progress to be made.

“The time is gone when promises will be made and promises will not be kept. Nigeria’s problem is not lack of natural resources. It is not lack of human resources. Our problem is lack of implementation of existing policies. Policies are created but not implemented. What Nigeria needs today is men if purpose who have the will power to implement policies. If we can do these, we can help chart the nation on a part of progress,” Ogbonnia explained.

Alhaji Mumakai-Umagha, another APC aspirant from the Delta region said it was regrettable to have such a situation in the party, accusing the party’s National Working Committee of sidelining other aspirants by inviting the president for several meetings without their knowledge.

“There was no reason whatsoever to warrant the increment. As it is now, the game is for the highest bidder and who gets what. The contest is gradually being narrowed down to those who stole government fund to pick nomination forms,” he lamented.

Chairman of the Economic and Financial Crimes Commission, Abdulrasheed Bawa, has expressed desire to operate an open door policy.
byLateef Idris
No comments 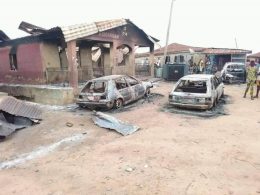 Governors of the South-West states under the aegis of the South-West Governors Forum, on Sunday, condemned the fresh attack on Igangan community, Ibarapa North Local Government Area of Oyo State, by people suspected to be herdsmen, leading to loss of lives and destruction of property.
byLateef Idris
No comments

President Muhammadu Buhari has departed Daura for Abuja after spending his Eid el-Kabir break. A News Agency of…
byTayo Aderinola
No comments