The Central Bank of Nigeria (CBN) has foreclosed the possibility of extending or shifting the deadline on the deposit of the old naira notes.

The Central Bank of Nigeria (CBN) has foreclosed the possibility of extending or shifting the deadline on the deposit of the old naira notes.

CBN Governor Godwin Emefiele apologised to Nigerians for not extending the deadline but stated that 100 days from when the announcement was made to the expiration date was enough for Nigerians to deposit their old notes.

Emefiele said: “We don’t see any reason to talk about a shift because people could not deposit their old monies to their banks”.

Regarding the circulation of new notes, the CBN Governor assured: “the new currencies will be made available. We hold about three meetings every week with the banks”.

The CBN Governor stated at the commencement of the exercise “the banks were doing more of the new currency over the counter to their priority customers rather than giving to the weak and small customers. We mandated them and said no more payment of new note over the counter.”

Disbursing new notes over the counter he said gave rise for it to be given to friends but the CBN ordered the banks to load “all new notes through the ATM which is a robot and everybody has to queue to get it and that has worked”.

Emefiele admitted the Nigeria Security, Printing and Minting Company (NSPMC) was still “producing new notes and we are supplying to the banks and so it will continue to circulate into the system”.

He said Governors have been notified there won’t be extension.

According to Emefiele: “We told them we have 1.4 million touch point of our super agents, those agents are going to be available to conduct cash exchanges or swap.

‘’Let’s not forget that the super agents are like kiosk, shops, stores in your community going about their petty businesses so whether in riverine areas or upland areas they are there and will exchange or swap old notes these we have put in place”.

Dr. Terkura Suswam, the slain elder brother of former Benue State Governor, Gabriel Suswam was aware of a death threat reportedly issued against him and his two brothers, according a source in the family.
byTayo Aderinola
No comments 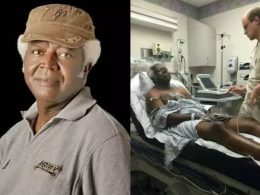 Veteran Nollywood actor, Chief Bruno Obinna Iwuoha, has died after many months of battle with diabetes and glaucoma.
byLateef Idris
No comments