Cash swap programme takes off nationwide, one week to deadline

A new programme intended to increase the speed of circulation of the new banknotes and increase awareness ahead of next week’s deadline for demonetisation of the old notes kicks off nationwide today.

• Banks yet to heed CBN’s directive, stock ATMs with old banknotes
• Buni begs for extension, says only four out of 17 Councils have banks in Yobe
• Zulum decries non-dispensing of new naira notes in Borno
• No cause for alarm over deadline, CBN says
• New notes surface in Anambra banks after threats by CBN

A new programme intended to increase the speed of circulation of the new banknotes and increase awareness ahead of next week’s deadline for demonetisation of the old notes kicks off nationwide today.

The initiative, known as cash swap, will provide an opportunity for Nigerians to swap old notes with new ones at super agents across the country. The intervention targets residents in rural areas and individuals with limited access to financial services.

The programme is a joint initiative of the Central Bank of Nigeria (CBN), deposit money banks and super agents.
In a circular announcing the programme on Friday, the apex bank said the swap deal is an attempt to create more awareness about the deadline for phase-out of the old N200, N500 and N1,000 banknotes.

The launch of the programme is not unconnected with the challenges rural dwellers could face returning their old banknotes to banks between now and next Tuesday after which they will cease to be legal tenders.

The Senate has called for an extension of the deadline to the end of the first half of the year. Governors have also weighed in, seeking variations in CBN’s naira redesign policy.

In a survey conducted by The Guardian, some Nigerians also urged CBN to shift the deadline by another six months.
But the monetary authority said there is no compelling reason to extend it, saying there are multiple channels, including agents operating in rural areas, where Nigerians could return the banknotes.

CBN Governor, Godwin Emefiele, also argued that 100 days, from when the policy was announced till January 31, was enough window for Nigerians with legitimate cash in their homes to return same.

The bank had suspended charges on above-limit cash deposits and called on commercial banks to extend operations till weekends to enable individuals to return cash in their possession.
But there appears to be sabotage on the part of banks in recent weeks as most of them have disregarded a regulatory directive to stop giving out old banknotes, especially at automated teller machines (ATMs).

Despite threats by CBN, some ATMs in Lagos were still dispensing old notes at the weekend.
The circular on cash swap signed by the Director of Banking Supervision Department, Haruna Mustafa, stated: “The programme enables citizens in rural areas or those with limited access to formal financial services to exchange old Naira notes for redesigned notes.”

The CBN explained that agents shall exchange a maximum of N10,000 per person, saying amounts above N10,000 may be treated as cash-in deposit into wallets or bank accounts in line with the cashless policy.
“BVN, NIN, or voter cards details of the customers should be captured as much as possible. To promote financial inclusion, this service is also available to anybody without a bank account. Agents may, on request instantly open a wallet or account, leveraging the CBN Tiered Know Your Customer (KYC) Framework.
“This will ensure that this category of the populace are able to exchange or deposit their cash seamlessly without taking unnecessary risk or incurring undue cost,” the circular said.

The bank stressed that agents shall sensitise customers on wallets/ bank account opening and other channels for conducting electronic transactions.

Designated agents are to collect the redesigned notes from DMBs in line with the Revised Cash Withdrawal Limit policy. While they are permitted to charge cash-out fees for the cash swap transactions, agents are prohibited from charging any further commissions.
“Principals (super agents, mobile money operators (MMOs) and DMBs) shall be held accountable for their agents’ adherence to the guidelines. Cash Swap agents will be readily identifiable in all local governments, particularly those in the rural area,” said the circular.
YOBE State Governor, Mai Mala Buni, has appealed to CBN to grant special concessions and alternatives for citizens in the state against the January 31 deadline to exchange old naira notes for new ones. According to him, the appeal has become inevitable due to lack of banking services in most parts of the state.

The Director General, Press and Media Affairs, Mamman Mohammed, disclosed, yesterday, in a statement in Damaturu that only four out of 17 Local Councils have commercial banks to receive the old notes.

The governor lamented that “it makes it very difficult for our people living in the remaining 13 Local Councils in accessing banking services.”

Besides, he added that the banks’ branches in the affected councils were closed during the peak of Boko Haram insurgency challenges.
He noted that despite improved security situation in the state, banks are yet to reopen their branches in the affected councils, including border communities in Geidam, Machina, Yusufari and Yunusari with Niger Republic, adding that this can make people lose their money without exchanging them with the new ones.

He, therefore, urged the apex bank to ensure commercial banks open branches in the Local Council headquarters, as there are improved peace and security across the state.
Governor of neighbouring Borno State, Prof. Babagana Zulum, has decried the non-dispensing of the re-designed naira notes from ATMs of banks in the state.

Zulum raised the alarm, at the weekend, in Maiduguri, during CBN Committee courtesy visit on the compliance of commercial banks to dispense N200, N500, and N1,000 notes to customers.
According to him, the presence of commercial banks is only in Maiduguri Metropolitan Council (MMC), Jere, Shani and Biu Local Councils in the state, declaring that 23 Local Councils lack financial services for over a decade to access ATMs for the redesigned new notes.

The governor noted that it has led many communities to face challenges of accessing financial services due to insecurity to lives and property.
Besides, he added that the destruction of telecom masts and financial institutions by Boko Haram insurgents in the state denied customers access to banking services.

He noted that all the infrastructures required to implement the policy are lacking in many communities, including the border areas with Niger, Chad and Cameroun.
“At present, I’m not in possession of the new notes, not to talk of the poor on the streets and those living in villages.”

He added that last week, the state government approved the release of N800 million to cushion the hardships of repentant Boko Haram terrorists.
“So, how does CBN expect these repentant terrorists, while they are in the custody of security agencies, to exchange the old notes with new ones?”

Ahead of the deadline, residents of Minna, Niger State capital, have expressed divergent views over their inability to meet up with CBN’s target date. While interacting with journalists, the Director, CBN Banking Supervision Department, Haruna Bala Mustapha, reaffirmed the apex bank’s position on the deadline.

Mustapha advised Nigerians to key into CBN cashless policy, adding that it is aimed at promoting economic development of the country.
“CBN is aware that reasonable number of Nigerians have no bank accounts and they have old naira notes. As apart of efforts to ensure a seamless exercise, we have put in place adequate arrangement to enable Nigerians, especially those living in rural areas do a swap of the old to new naira without stress.”
RESIDENTS of Rivers State have expressed doubt over the CBN deadline. The uncertainty followed the low circulation of the new naira notes in the state. A visit to some banks and observation at ATM machines showed that they were still dispensing old naira notes.

Speaking, Austin Thomas, said: “I really don’t understand this country. How can you say you are ending circulation of old notes next week and we are yet to see the new notes?”

Mrs. Magreth Brown said: “We go to the ATM, we don’t see the new notes, we go to the bank, we are not given the new notes, so by January 31 when we have deposited all our old naira notes, what are we going to use?”

The CBN Branch Controller, Maxwell Okafor, said the deadline will not be shifted, urging the public to embrace the cashless economy.

Commercial banks in Anambra State have started loading the new naira notes in ATMs for their customers following threats by CBN to sanction them for allegedly not co-operating with the apex bank in the implementation of the new monetary policy.

A customer of one of the first-generation banks in Onitsha, Kingsley Nwankwo, said he was paid N30,000 new notes at the ATM on Friday. Also in Nnewi, all customers who queued up for money received new notes at the banks.

Vice President, Yemi Osinbajo has issued a fraud alert to warn traders against filling any forms to benefit…
byTayo Aderinola
No comments 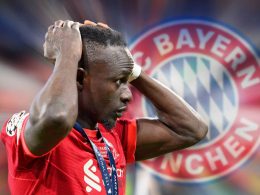 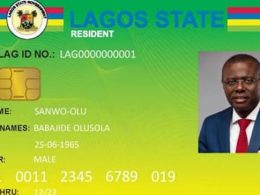 The Lagos State Residents Registration Agency (LASRRA) is set to introduce a New Resident Card that will serve multipurpose functions for residents.
byTayo Aderinola
No comments 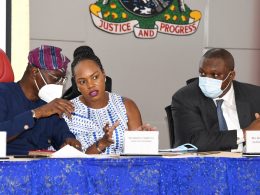 Lagos State Government has rolled out a $20 million Coronavirus (COVID-19) Action Recovery and Economic Stimulus (Lagos CARES) Programme to support livelihood for poor and vulnerable households and to expand food security services in the State.
byTayo Aderinola
No comments