56,000 naira minimum wage and the category of the ‘impossible’

My favourite slogan from the May 1968 Paris students and workers revolt is “soyez raisonable, demandez l’impossible” meaning that being reasonable could also mean making demands that appear unreasonable in the current thinking. By the time President Charles De Gaulle fled Paris in fear of the one million protestors that threatened to march on the Elysee Palace, the French ruling class was ready to sit down and negotiate the demands they had earlier dismissed as unreasonable. In our context in Nigeria today, it appears unreasonable to think that the minimum wage could be raised from 18 to 56 thousand Naira when three quarters of the States are unable to pay the current rate.

Of course the important question is not the fact that they are not paying, but why are they not paying?  The Federal Government gave bailout to most States to allow them pay the backlog of salaries. Many governors used the money for contracts from which they apparently received kickbacks rather than pay workers their due. As the President of the NLC said in Saturday’s symposium, so many workers have been turned into beggars after months without their salaries being paid. Meanwhile Government officials have looted trillions of Nara over the past few years. One military officer alone was pocketing 500 million Naira from their allocation every month. What can be paid or not paid is always a question of choices made within a number of possibilities and the category “impossible to pay” is a choice not to prioritise the welfare of workers.

As Femi Falana argued in his paper to the Saturday symposium, the important point is that our Constitution guarantees rights, including the security and welfare of all citizens but these rights – to health, education and a decent wage have not been respected by successive governments. Everyone knows that a family cannot be maintained decently in contemporary Nigeria with a monthly wage of 18,000 Naira, which is the equivalent of $56 and yet the evacuation of the people’s rights is so deep that demanding for a decent wage is considered unreasonable. Of course the 2011 Minimum Wage Act requires re-negotiation ever five years so the NLC and TUC are simply following the law by their demands but such is the depreciation of workers rights that even paying them their earned income in considered the least of priorities.

Professor Olorode argued in the Symposium that part of the problem is that the Nigerian Labour Movement has been unable to define its discourse on the rights of workers in recent years. The 1981 Worker’s Charter of Demands for example created strong arguments that enabled the Labour Movement to keep governments on their toes at that time. The last time we had a strong workers/civil society movement was in 2012, following the New Year day fuel increase by the Administration of President Jonathan. Rather than Nigerians enjoying the breath of fresh air he had promised, Nigerians saw suffering, rising costs for transport, food and other essentials escalated. Almost immediately, protests developed all over the country and the NLC, TUC and civil society stepped in to give direction and leadership to the protests. The anger was real and had been brewing for a long time. The price of petroleum products had been increased eighteen times prior to the January 2012 increase over a period of 26 years. Each time it had occurred, Labour has provided leadership for protests and forcing government to at least reduce the rate of increase.

The fuel subsidy protests grew rapidly into an occupy Nigeria movement until it was stopped abruptly by the capitulation of labour on 12th January 2012. The “capitulation”, it was rumoured, was oiled by huge bribes given to labour leaders. That was the last time the Nigerian labour movement was involved in any progressive engagement until the end of the Jonathan Administration. The Abdulwaheed Omar NLC then focused its energies on anything but struggle.

Historically, the pact between labour and progressives to fight the Nigerian cause first emerged with the Cost-of-Living-Allowance General Strike of 1945. The labour movement with support from progressive nationalists sustained a general strike by 30,000 workers for 37 days. The railways, posts and telecommunications and general colonial administration were completely paralysed. The following year, the trio of Herbert Macaulay, Michael Imoudu – Labour Leader no. 1 and Dr Nnamdi Azikiwe formed a common front to mobilise Nigerians to demand for self-government visiting 45 towns all over the country.

While in Kano, the veteran Herbert Macaulay died at the ripe age of 82. In his funeral in Lagos, Azikiwe reminded the nation “Macaulay has left us an imperishable legacy, the struggle for the attainment of social equality, economic security, religious tolerance and political freedom… Let us perpetuate his ideas of freedom, they can be realised in our life time”. This was the tradition maintained by labour leadership through the times of Wahab Goodluck, Dapo Fatogun, Hassan Soumonu, Liman Chiroma, Pascal Bafyau and Adams Oshiomhole. Over the decades, labour, students, ASUU and progressive intellectuals have repeatedly come together at moments of national anguish and political repression to lead protests that have revived belief in a better future for the country. This is the tradition that was halted by the Omar leadership of the NLC which broke the pact with the progressives and maintained a “sidon look” attitude as economic crisis, poverty, insecurity and malgovernance continued to grow.

Today there is a new leadership in the Nigerian Labour Congress under Comrade Ayuba Waba, which is trying to bring focus back to the struggle for workers’ rights and welfare. Of course conditions are difficult following the collapse of petroleum prices and the contraction of the economy. The reality however is that the present conditions could be an opportunity to start rebuilding the economy so that we can produce more jobs and better welfare. That is the mandate on which President Buhari won his election. That is also the mandate on which Comrade Waba won his election. This context therefore creates conditions for collaboration and cooperation in improving the rights of Nigerian workers.

I was pleased to hear both the Presidents of the NLC and the TUC make strong demands on Government to search for and rescue the Chibok Girls. The Omar leadership of the NLC was so close to the Jonathan Administration that they refused to join the rest of Nigerians, indeed the world in supporting the #BringBackOurGirls Movement which has maintained a steady patriotic and humanist campaign to end terrorism and obtain liberation for the Chibok girls that were abducted by Boko Haram. The new leadership of the Labour Movement is trying to return to the tradition of engaging in making accountability demands on Government and I wish them the best in their May Day resolutions. Forward Ever, Backward Never remains the motivation.

Jibrin Ibrahim, PhD, is a Senior Fellow at the Centre for Democracy and Development, Abuja, Nigeria. 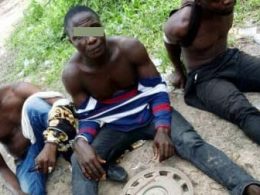