The Federal Government yesterday launched the repair of the 30.1 kilometre Ikorodu-Sagamu road.

The road, a major link between Lagos and Ogun states, en route other states, has been in disrepair for over 12 years.

The rehabilitation, estimated at N20.8 billion, is awarded to Messrs Arab Contractor O.A.O. Nigeria Ltd, with a duration of 36 months.

Fashola assured residents of government’s commitment to complete the job on time.

He said Arab Contractor is a tested hand that will do the best of job.

“Arab Contractor built Obafemi Awolowo Road, Ibeshe, to the satisfaction of everybody. In essence, the Federal Government awarded the contract to the firm, based on competence and integrity,” the minister said.

He solicited residents’ cooperation to ensure that the job is done.

Ashafa, reminding the audience how long the road has been neglected, hailed President Buhari for the gesture.

He said the project would be completed as scheduled, as funds for it were available.

“We want to assure Lagosians that the project has received the funds. So, the issue of project abandonment does not arise,” the senator said.

Benson assured the community of improved economic activities during and after the construction.

He advised residents to support the contractors, adding: “The inconveniences that may arise from the construction is only for a while.

“The end justifies the means. This road, upon completion, will attract progress to this community. The impact of this road on our community will be phenomenal, especially when you consider that it is a major arterial road linking states.

‘’This road will free up the pressure on the Lagos-Ibadan expressway, thereby making life easier for commuters.”

Dabiri-Erewa urged the National Assembly to speed up passage of the budget so that funds would be released to the Power, Works and Housing Ministry, to execute more projects. 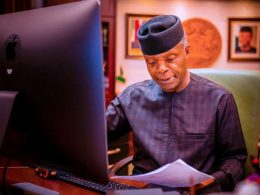 Lagos announces relaxation of curfew from 10pm till 6am