Among the dignitaries are former Head of State Yakubu Gowon and ex Head of the Interim National Government, Chief Ernest Shonekan.

Other dignitaries at the event were serving and former ministers, the Head of Service, Mrs Winifred Oyo-Ita, former and serving members of the National Assembly, led by Reps Speaker Yakubu Dogara.

Also in attendance were governors of Plateau and Osun as well as former Governor of Rivers, Dr Peter Odili and his wife, Justice Mary Odili.

The event, which took place at the State House Conference Centre, was onganised by the Presidency to honour God for the gift of Christ, keeping the country together as well as for greater opportunities for the country in future.

He prayed for Nigerians and the leaders of the country and for God to continue to direct their affairs.

Adeboye said that Nigerians should be grateful to the Almighty for keeping the country together in spite of the challenges and prayed that the peace in the country should be sustained.

Citing many testimonies of individuals who received God’s favour in various forms, the cleric stated that God is Almighty and lifts people and nations out of troubles and sicknesses by touching, lifting, embracing the one He chooses.

Accordingly, he said that anyone so favoured would continue to reap the benefits.

Adeboye, however, warned that those who shun following the ways of the Lord could be left by Him to suffer and advised all who had not given their lives to God to quickly do so.

The News Agency of Nigeria (NAN) reports that three scripture lessons were read at the concert by Speaker Yakubu Dogara, Finance Minister Kemi Adeosun as well as the Head of Service, Mrs Oyo Ita.

Special renditions were also made by the FCT School for the Blind choir to the admiration of the guests as well as by top gospel singers, Blessing Ilagha, Nathaniel Bassey and Pastor Kunle Ajayi.

The Spokesman to the Vice President, Pastor Laolu Akande, on behalf of his boss, thanked the guests for keeping a date with the Presidency and prayed for God to see the nation through in its endeavours.(NAN) 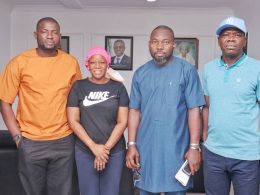 As the year wraps up, Eti-Osa Local Government Chairmen meet to deliberate on salient issues that will be of great benefit to the residents and Eti-Osa as a whole.
byTayo Aderinola
No comments

President Muhammadu Buhari has ordered the immediate suspension of the Director-General of the National Broadcasting Commission (NBC). The…
byTayo Aderinola
No comments