Two men, Kazeem Ekundayo, Waliu Majiyagbe, who allegedly obtained the sum of N2million, under false pretext of selling land, were On Monday, arraigned before a Lagos Magistrates’ Court, sitting in Igbosere.

Ekundayo, 43 and Majiyagb, 42, whose residential addresses were not given, are facing a three-count charge of conspiracy, fraud, and stealing, preferred against them by the police.

However, the duo pleaded not guilty to the charge.

He said that the defendants fraudulently obtained the sum of N2 million from the complainant, Mr. Samuel Mabeweje, under the guise of selling eight plots of land but failed to do so.

Osuji said that the defendants converted the said N2 million to their personal use.

According to him, the offenses committed are punishable under Sections 287, 314 and 411 of the Criminal Law of Lagos State, 2015.

The Magistrate, Mr. A. O. Alogba granted them bail in the sum of N200, 000 each with two sureties each in like sum.

Alogba ordered that the sureties must be gainfully employed and must show evidence of tax payment to the Lagos State Government.

He adjourned the case until April 2, for mention.

Gov. Akinwunmi Ambode of Lagos State on Monday made a public declaration for re-election in 2019 on…
byTayo Aderinola 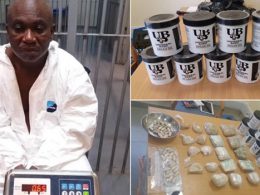 It was another busy week of battle of wits between operatives of the National Drug Law Enforcement Agency, NDLEA, and drug traffickers who tried to either import into Nigeria or export to the United Kingdom and Italy illicit drugs including cocaine, heroin, and cannabis weighing 37.3kilograms; all of which were intercepted and seized in five different bids while seven persons were arrested.
byLateef Idris

Lagos State Governor, Mr Babajide Sanwo-Olu, says all hands must be on deck in creating hygienic conditions that…
byTayo Aderinola