Ambode to commission 6 Eko Theatres in 2018

Plans have been concluded by the Akinwunmi Ambode-led government in Lagos State to officially open its six ‘Eko Theatres’ presently under construction across the state before the end of year 2018.

Ayorinde, who spoke at the All African Music Award 2017 in Lagos, said that the construction of the theatres was aimed at boosting tourism and entertainment in the state.

He said that three of the theatres would be commissioned by the first quarter of 2018 ahead of the third anniversary of Gov. Akinwunmi Ambode’s administration.

According to the commissioner, the construction of the theatres is on course and will be ready on schedule.

“The first three of the Eko Theatres will be ready on schedule by the first quarter of next year.

“Gov. Akinwunmi Ambode is passionate about it: He visited the construction site of one of the theatres in Badagry last week and it is about 65 per cent completion level; same thing we have in Alomosho and Ikorodu.

“There are six of them scattered all over the state, but we are sure that the first three will be ready for inauguration before the next democracy day May 29, 2018.

“The opening will be used to commemorate the third anniversary of the administration, so we are putting much energy on it to have them completed,’’ he said.

Ayorinde said that other three Eko Theatres would be ready by December 2018, adding that Ambode was ready to make tourism and entertainment the hallmark of his administration.

“We are committed to the new economy because we all know what entertainment and tourism brings to table when it comes to revenue and income generation,’’ he said.

Ayorinde said that AFRIMA 2017 was in sync with the vision of the present administration in the state, adding that the state welcomed activities that would boost its economy.

“AFRIMA fits in well to what the governor has in his vision. Gone are the days when people were salivating about oil and gas or agriculture.

“The scope has changed now and everybody is talking about the new economy and there is no other than entertainment industry in which we have music, arts, photography and rest.

“The state will always welcome activities like this to boost the economy of the state which has been our focus. AFRIMA clearly fits into our vision, so also AMA awards and others.

“We want to use this new economy to create jobs and to create opportunities to drive the Gross Domestic Product of Lagos State,’’ he said.

The 4th edition of AFRIMA, a Pan African musical show supported by the African Union, was held from Nov. 10 to Nov. 12 in Lagos. 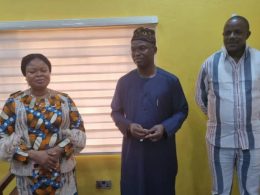 The honorable member representing the Ikeja Constituency II, in the Lagos State House of Assembly (LSHA), Hon Adedamola Richard Kasunmu has rolled out 200 General Examination Council (GCE) forms to support the education of vulnerable youths within his constituent.
byTayo Aderinola
No comments

Some prominent Nigerian Celebrities on Wednesday pledged their support for the re-election of President Muhammadu Buhari. The celebrities…
byTayo Aderinola
No comments