The annulment of June 12 1993 presidential election led to “bloodshed, serious division and disunity in Nigeria’’, Alhaji Bola Tinubu, one of the key players for the actualisation of the mandate, declared on Tuesday.

The National leader of All Progressives Congress (APC) said in an interview at the presidential villa that the recognition of June 12 as Democarcy Day was a demonstration of the resolve by the people to collaborate to drive democracy.

He said that the fight against the annulment of the June 12 election was a battle of principle, philosophy, and restoration of democratic process.

He said that it was the same collaboration also in 2014 that led to the installation of the government of President Muhammadu Buhari.

Tinubu said that the courage, commitment and fortitude of Buhari to recognise June 12 was worthy of recognition and commendation.

In an interview segment on TVC television on the side line of the investiture of national honours on MKO Abiola, the winner of the June 12, election, and other pro-democracy activists, some Nigerians expressed happiness over Buhari’s advancement of democracy.

“The fingers of providence have continue to point to Nigeria as unjust nation.’

In spite of court pronouncement on the illegality of Chief Earnest Shonekan, as head of Interim National government to supplant the June 12 election, Shonekan, a kinsman of Abiola, has continued to parade himself as a former Nigerian leader.

He praised Buhari for the recognition and also said that the president was truly building Nigeria.

“Buhari is washing Nigeria with soap,’’ he said.

Buhari, he said was redressing injustice, saying: “Some of the problems we have in Nigeria are products of injustices.’’

“Buhari is healing the wounds,’’ he said.

Access Bank Plc has denied its group managing director, Mr. Herbert Wigwe, has been arrested by the Economic…
byTayo Aderinola
No comments 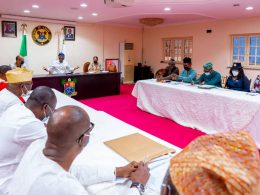 Governor Babajide Sanwo-Olu held a closed-door meeting with members of the Nigerian Association of Nurses and Midwives, Lagos State Council at the State House, Marina on Sunday evening. The meeting was called by the Governor to address the grievances of the nursing workforce in the State.
byLateef Idris
No comments