Proceedings resumed on Monday at the coroner’s inquest into the circumstances surrounding the cause of death of Sylvester Oromoni, a 12-year-old student of Dowen College, Lekki.

Proceedings resumed on Monday at the coroner’s inquest into the circumstances surrounding the cause of death of Sylvester Oromoni, a 12-year-old student of Dowen College, Lekki.

The coroner, Magistrate Mikail Kadiri, who is sitting at the Ikeja Magistrates’ Court in Ogba, barred journalists from covering and witnessing the inquest.

The registrar of the court, who announced the Magistrate’s order, said that the hearing was mainly for lawyers. He asked journalists and others to leave the courtroom.

Channels Television learnt that some Dowen College school students accused of beating the late Sylvester Oromoni and others who allegedly played football with him as well as some of his roommates had been invited by the coroner to testify.

A representative of the Nigeria Bar Association said, “Journalists will be shut out from covering the inquest this week because minors will be testifying.

“The witnesses are minors and the purpose is to protect the Child Rights Acts”.

The deceased’s father had alleged that his child was beaten by some senior students and forced to drink a liquid that eventually killed him.

But the school denied the claim, alleging instead that he sustained injuries while playing football with his mates. 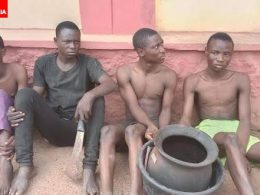 The Ogun State Police Command says its operatives are working to hunt and arrest the social media user who posted a get-rich-quick video on Facebook from where four Ogun teenagers learnt money ritual.
byTayo Aderinola
No comments

The Lagos State Government through the Lagos State Water Regulatory Commission (LASWARCO) on Thursday signed a major Momorandum of Understanding (MoU) with a leading global organisation that is focused on Water and Sanitation, WaterAid International.
byLateef Idris
No comments