Members of the Academic Staff Union of Universities (ASUU) on Tuesday, were absent at a meeting called at the instance of the Federal Government over the lingering industrial action in universities.

Sen. Chris Ngige, Minister of Labour and Employment had called for a meeting in Abuja with ASUU leaders, Minister of Education, among others on effort at revolving the lingering strike embarked by the union.

It would be recalled that members of ASUU embarked on indefinite strike on Aug. 13, following government’s failure to implement the agreement reached in Nov. 2016.

ASUU, on Aug. 17, had met with the officials of the Ministry of Education and Labour and Employment where it was agreed that the union should consult and revert back to government within a week.

ASUU demands include the disputed registration of the Nigerian Universities Pension Management Company, fractionalisation of salaries in Federal Universities, gross under-funding and non-funding of State Universities.

Others are arrears and implementation of Earned Academic Allowances, release of fund for revitalisation of public universities as spit out in the 2013 Memorandum of Understanding, among others.

“Today we are supposed to have a formal meeting with the Minister of Education and other stakeholders in the government side and ASUU.

“But we had some new development, which made it mandatory, that we roll over this meeting to the next day.

“Because the government as you know on Aug. 18 gave ASUU an offer, through the Ministry of Education and yesterday when ASUU got back to us, which was late, the meeting has already been scheduled.

“ ASUU had gotten back to government to say that they needed us to deliberate on their counter offer before we can have a formailised meeting,‘’ Ngige  said.

The minister said that with the new development, government acceded to it by calling for a meeting with stakeholders in the government side on their offer.

He noted that it was only after the meeting that government and the union would then have a reconciliatory meeting to further discuss the areas of disagreements or the union’s new demand.

“That is the position we are now and as I speak, we are having a government side meeting that is being held in my office while the Minister of Education is at another point having a meeting.

“We will reconcile into a full government meeting by 3 p:m today and then formalised our position and look at the ASUU request.

“Then, tomorrow is FEC meeting and we also need council approval for some of the things we are doing.

“This is on what government has decided, thereafter we would speak with ASUU either tomorrow or Thursday whichever is convenient to both parties, ‘’he said.

Also, Mr Biodun Ogunyemi, ASUU president in a signed statement said the union had collated the views of its members submitted to government on Aug. 28.

“As we await the Federal Government’s action on our letter, we hope that it would not be long before we receive a positive response which will bring an end to the dispute.’’

Ogunyemi called on government to speedily address the issues in the best interest of the Nigerian University System and for the overall development of the country.

He commended Nigerians, especially the students and parents for their understanding.

The Honourable Commissioner for Wealth Creation and Employment, Mrs. Yetunde Arobieke, has encouraged youths in the State to identify the needs within the environment and begin to proffer solutions to open the gateway of becoming entrepreneurs.
byLateef Idris
No comments

The Oodua Peoples Congress has accused President Buhari of being insensitive to the plights of Nigerians, saying the sudden increase in the electricity tarrif is brutish and inhuman, describing it as an attempt to fuel national crisis.
byTayo Aderinola
No comments 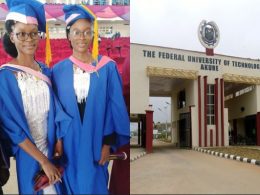 Photo-News: Meet twins who graduated with first-class at FUTA

Taiwo Oluyale has emerged as the best graduating students at the Federal University of Technology, Akure (FUTA) for the year 2021.
byTayo Aderinola
No comments