Saraki’s lawyer, Mr. Paul Erokoro (SAN), made this claim while cross-examining the first prosecution witness, Mr. Michael Wetkas.
The Senate President is being prosecuted by the Federal Government before the Danladi Umar-led CCT on charges bordering on alleged infractions in the asset declaration forms he submitted as Governor of Kwara State between 2003 and 2011.

Erokoro cross examined Wetkas in respect to the prosecution’s allegation that the Senate President had on assumption of office as Governor of Kwara State in 2003, declared the property at 15 Mcdonald Street, Ikoyi, Lagos, as part of his assets whereas he (Saraki) only acquired it in 2006.

Wetkas maintained that Saraki bought the property from the Presidential Implementation Committee during the Sale of Federal Government Properties in 2006, meanwhile he had declared it as part of his assets on September 16, 2003.

He also maintained that Saraki declared that he acquired the property, 15A and 15B, Mcdonald Street, Ikoyi, Lagos in 2000 through his company Carlisle Properties “whereas our finding revealed that he acquired it through Tiny Tee Limited in 2006”.

He said, “As of the time this document (the defendant’s asset declaration form made on assumption of office in 2003) was prepared, this property had not been sold.

“What I found out which was what I said in my evidence-in-chief was that in the course of our investigation, we came across 15A and 15B Mcdonald Street, Ikoyi.

“We wrote to the Presidential Implementation Committee. We also wrote to Lagos Land Registry, who said they didn’t have record of 15 Mcdonald Street, Ikoyi.

“In the case of the prosecution and the evidence I gave was that 15 Mcdonald was sold to Tiny Tee Limited belonging to the defendant (Saraki) which we did not see in any of the asset declaration forms.”

But Erokoro said it was impossible for his client to have declared the property earlier in 2003, when it was only offered for sale and keenly contested for by various parties in 2006.

“Another bidder, Chief Charles Sante, Tiny Tee and Bitti Oil, the occupant of the house Nwosu Vitus Egwuagu insisted that the property should be sold to him. He wrote a letter to the minister complaining that the property was not offered to him first as required under the policy. He was later allowed to participate.

“The property was first offered to Energy Marine Resources at the cost of N251m, there was a struggle for it so the defendant would have known that he would eventually get it”.

“I put it to you that the reason Energy Marine Resources did not buy it, was that, what was advertised was smaller than what was offered. So they refused to pay. Thereafter the property was offered to the sitting tenant.”

He said given the contest for the property it could only have been possible that the document had been doctored by inserting the property at 15A and 15B, Mcdonald Street, Ikoyi.

He said, “Exhibit 1 has been tampered with. Who inserted the property?

“Was that why you never confronted him with Exhibit 1?
Your team did not invite the defendant because you were afraid that he would challenge the document.”

But in his response, Wetkas, denied the allegation that the document was tampered with, pointing out that each page of the document bore the signature of Saraki and the date it was signed on September 16, 2003.

He said he had no reason to doubt the correctness of the document because it was backed by an affidavit sworn before a judge.
He said, “I did not sign it. It was signed by the defendant. As far as I am concerned from the document it was signed by the defendant on September 16, 2003. No, I did not insert the property. There has never been any case of complaint of insertion.
The Code of Conduct Bureau is a responsible agency of government; they could not have inserted it.

“He swore to an affidavit before a judge. Whether I see him or not is immaterial. Since it was sworn to before a judge, I believe the content to be correct.” 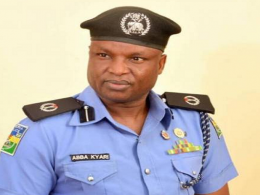 In what appears to be a new twist, suspended Deputy Commissioner of Police Abba Kyari, in a now-deleted post, said Ramon Abbas, popularly known as Hushpuppi contacted his team to help recover N8 million for a friend.
byTayo Aderinola
1 share
1
0
0
No comments A major disaster has been averted at the Lagos Airport Road as a tanker loaded with 33,000 litres…
byTayo Aderinola
No comments

Lagos State Governor, Mr. Babajide Sanwo-Olu, has commiserated with the family, friends and associates of member of the…
byTayo Aderinola
13 shares
13
0
0
No comments