Relevance of the intervention concept in solving cattle imbroglio

Relevance of the intervention concept in solving cattle imbroglio

It is common knowledge that  cattle catastrophes continues to  catapult concurrently so it will be apt to apply the wisdom in the maxim that it is out of disorder that order emanates. The truth of the logic in this maxim can vividly be seen in the stability and buoyancy now  in the banking sector following the AMCON intervention. Hitherto  bank  customers were at the risk of losing  their  deposits to weak banks but for the government  plying the intervention  route to save the banks from going under as the eventual failure of the banks was in sight.

Pastoralism is a form of livestock Production economy consisting on primary reliance on the production of domestic animals (cattle, sheep and goat) for at least 50% of a family’s subsistence (Frantz 1980, Salmon 1980). Pastoralists are a group of people for whom pastoral activities (herding and care of animals) account for more than 70% of working time and provide more than 50% of total family. Apart from being an economic activity, it also has important socioeconomic, sociocultural and political significance.

In West Africa, the cattle nomads in the Sahel Ian region began a jihad in 1804, conquering the seven original Hausa kingdoms of today’s northern Nigeria and pushing eastwards to today’s northern Cameroon. They settled as rulers of the kingdoms they conquered, dispensed with their cattle and, in most cases, switched to the language of the peoples of their empire. Meanwhile, their “brothers”, who still herded cattle, migrated still further into Central Africa, impelled onwards by ever-increasing arable expansion.

Fulani herdsmen’s engage in both random and planned transhumance movements. Random movements are usually taken by the pure nomadic Fulani herdsmen while planned movements are taken by the semi nomadic pastoralist. A primary reason for the migratory nature of the herdsmen is to reach areas with abundant grass and water for the cattle.[2] The herdsmen also move to avoid tax collectors, harmful insects and hostile weather and social environment. A major benefit of the movement for the herdsmen is to maximize the availability food resources for the cattle and reduce excessive grazing.[5] Before moving new areas, the herdsmen send a reconnaissance team to study the area for availability of resources such as grass and water.

Intervention of the Asset Management Company of Nigeria (AMCON) in the nation’s economy may have hit above N1.832 trillion, according to document made available to Weekly Trust. AMCON was set up in 2010 to clean up the banking system following a $4 billion Central Bank of Nigeria rescue of nine banks that came close to collapse. Since then, the corporation has intervened in every sector of the economy.
For instance, in the aviation sector, AMCON’s intervention led to the takeover of about US $ 1billion non-performing loans (NPLs) from Nigeria banks owed by airlines. AMCON also undertook  restructuring initiatives for airlines and supported all the airlines taken over with working capital.
Other real sectors in which AMCON has intervened to save companies include oil and gas, manufacturing, agriculture and construction. In the Manufacturing sector, AMCON intervened with N51 billion to car manufacturers, breweries, steel manufacturers and cocoa product companies, Oil & Gas through the purchase of None performing loans worth over N 400 billion. As a result, the sector has received further funding from the banking sector and sustained the supply of finished products to the market.
In agriculture, AMCON’s intervention saved N 31billion, that prevented job losses and positively affected agro-allied industries while it availed the construction sector with N19 billion to support projects undertaken by construction firms. In the banking sector, AMCON acquired three bridge banks – Mainstreet, Keystone and Enterprise – from the Nigerian Deposit Insurance Corporation for N765.3 billion and prevented potential liquidation. AMCON injected capital into Oceanic, Intercontinental, Finbank, and ETB & Union through Bond issuances of N1.566 trillion (Discounted Valued of $10.06 billion) to prevent the failure of the banks. All of the intervened banks have been successfully capitalized, with some presently merged and others under new management. AMCON had issued a total of 1.7 trillion naira ($10.72 billion) in bonds to buy non-performing loans which were valued at 2.2 trillion naira at the time of the 2009 bank bailout 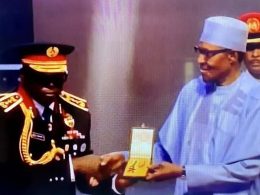