byTayo Aderinola
3 minute read
Total
0
Shares
0
0
0
… SAYS RIGHTS TO CONDUCT MARRIAGES RESIDE WITH LGAs/LCDAs IN LAGOS
For the second time, the Lagos State Government has secured another court injunction restraining the Federal Government owned Registry in Ikoyi from conducting marriages, saying it was unconstitutional for the Federal Government to be usurping the power of the State Government and the Local Government in this regard.
The judgment delivered by Professor Chuka Aunstine Obiozor with the reference number SUIT NO: FHC/L/CS/1760/16 of Lagos High Court in favour of Lagos State and which took effect on Monday 30th of April 2018, reaffirmed that all the marriage registries in the Local Government and Local Council Development Areas in Lagos are the authentic and legally-binding government division established to carry out such function.
Addressing a Press Conference on the development on Thursday, the Commissioner for Local Government and Community Affairs, Hon. Muslim Folami said the Ministry is in the process of officially communicating the development to the various Embassies in the State, stressing that the decision of the court is supreme and is legally binding on all, the embassies inclusive.
He added that the Press Conference was strategically necessary in order to intimate the various Embassies resident in Lagos State, the general public and the Country at large that all Marriages conducted and registered in any of the 57 local Government Areas/ Local Council Development Areas are VALID and in accordance with the Marriage Act.
According to him, the judgment would undoubtedly put a stop to the seeming perception of superiority of Ikoyi Marriage Registry over the Local Government Registries.
FOlami said that the state government would explore every available windows to enlighten the general public about the development, assuring that the Ministry will not hesistate to schedule meeting with all the embassies in the State tto enlighten them aboiut the new judgement if the need arises.
“We are going to use the five divisions across the state to sensitize our people and inform them about this latest development. From Epe to Ikorodu, Badagry, Ikeja and Lagos Island. The sensitization walk which we embarked on today is also a way of creating awareness and letting the people know of this latest development.”
He congratulated the efforts of the Management of the various Local Governments and specifically the Marriage Registrars in the LGAs/LCDAs and urged the members of the public to take cognizance of this landmark judgment by patronizing the legal and approved Marriage Registries for the conduct of their Marriages.
The President described the judgement as a landmark, saying that the responsibilities of the LGAs/LCDAs has come back to them by the virtue of the law and as provided for inSection 30 (1) of the Marriage Act and Section 7 (5) of the 1999 constitution of the Federal Republic of Nigeria.
While delivering his address, the President for the Marriage Registrars in all the Local Government and Local Council Development Areas, Mr DEJI Sokeye said the illegal use of power by the Ikoyi Registry had seriously and negatively affected the revenue drive of the various Councils in the State, maintained that the judgement would further restore hope and confidence in the certifcates already issued and that will be issued in future by the local government.
He recalled that a similar judgement was delivered in favour of the state government in 2004 but was disregarded by the federal government, stressing that the similar judgement now delivered by Honourable Justice (Prof) Chuka Austine Obiozor shows the disposition of the current administration to the rule of law.
Sokeye disclosed that the State Government have now devised another means of authenticating its seal which now carry red seal with a coded block for all the Council Areas across the State.
Speaking on the authenticity of existing marriage certificates obtained from the local council areas before the new judgment, the president explained that the new certificates that would henceforth be issued by the various council areas does not invalidate the previous certificates.
“There is nothing wrong with the former certificates that did not carry the Red Seal, the Red Seal is just an innovation to the former one and it does not in anyway render the former one invalid’’ He said.
Bisi Olufuwa,
Director, Public Affairs
Ministry of Local Government and Community Affairs
May17, 2018
Total
0
Shares
Share 0
Tweet 0
Pin it 0

Why we closed parts of EKO Bridge – Sanwo-Olu

Cost Of Data Reduced By 50% Since January – NCC

Oshinowo gave his all in service to Nigeria – Sanwo-Olu 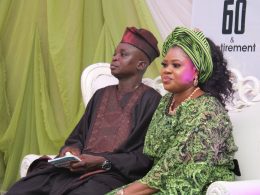 The headquarters of Ojodu LCDA, Oke-ira was a hive of excitement as the Council Engineer, Shomade Gregory Abiodun Babatunde (MNIOB) was glamorously celebrated on his 60th birthday and retirement from public service.
byTayo Aderinola
1 share
1
0
0
No comments