Godwin Emefiele, Governor of Central Bank of Nigeria (CBN), on Monday, withdrew the suit he filed against the Independent National Electoral Commission (INEC) and the Attorney-General of the Federation over his presidential ambition.

Godwin Emefiele, Governor of Central Bank of Nigeria (CBN), on Monday, withdrew the suit he filed against the Independent National Electoral Commission (INEC) and the Attorney-General of the Federation over his presidential ambition.

Emefiele, through his counsel, S.T. Maliki, told Justice Ahmed Mohammed that a notice of discontinuance had been filed and served on the defendants in the matter.

The development occurred shortly after the matter was called.

Maliki, who held the brief of Chief Mike Ozekhome, SAN, said though the matter was scheduled for mention, they had Emefiele’s instruction to withdraw the suit.

“Pursuant to the instruction of the plaintiff (Emefiele), we filed a notice of discontinuance dated and filed May16, 2022

“And the said notice of discontinuance was served on all the defendants on that said date of May 16, 2022, which proof of service is before your lordship,” Maliki said.

The lawyer said of all the defendants, only the 4th and 5th defendants filed a counter affidavit in response to the plaintiff’s amended originating summons, after the notice of withdrawal had been served on them.

He prayed the court to discontinue the suit and make an order striking it out, issues having not been joined by parties in the suits, citing Order 50 of the rules of this court.

Although lawyer to the 4th defendant, John Aikpokpo-Martins, opposed Emefiele’s intention to withdraw the suit, he urged the court to dismiss the suit with N1.5 million cost.

However, counsel for the 2nd and 3rd defendants, Chris Nevo and T. J. Adi respectively did not object to the withdrawal notice.

For Nevo, he asked the court to award a N1 million cost against Emefiele.

In his ruling, Justice Mohammed held that Emefiele had the right to file the notice of withdrawal.

He said the notice of discontinuance was valid and accordingly struck out.

The News Agency of Nigeria (NAN) had, on May 9, reported that Emefiele, through his lawyer, Ozekhome, had approached the court.

He had approached the court with an ex-parte motion, seeking the court’s interpretation as to whether he could run for the 2023 presidential primary while he holds as governor of CBN.

He had sought an order of the court, restraining the Federal Government from removing him from office over his presidential ambition, pending the hearing and determination of the substantive matter.

He also prayed the court to stop the INEC from taking any action against him in the bid to contest in the presidential primary by virtue of his office.

The CBN governor made the prayers in an ex-parte motion dated and filed on May 9 by his lawyer, seeking an order of maintenance of status quo ante bellum pending the hearing and determination of the substantive suit.

Emefiele, in the suit, sued the INEC and the AGF as 1st and 2nd defendants respectively.

But Justice Mohammed, on May 12, also joined the Peoples Democratic Party (PDP), and two other lawyers, for themselves and on behalf of members of Save Nigeria, Our Fatherland, as 3rd, 4th and 5th defendants respectively.

Facebook bans Epoch Times from buying ads on its platform 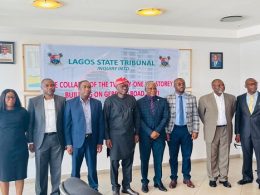 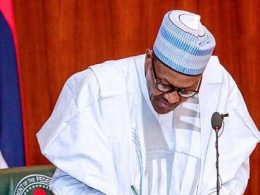 President Muhammadu Buhari has approved the reconstitution of the Governing Board of the National Broadcasting Commission (NBC), following the expiration of the tenure of the former board.
byLateef Idris
No comments