Lagos State Governor Babajide Sanwo Olu has reaffirmed the commitment of his administration to the welfare of the families of late officers of the armed forces.

Lagos State Governor Babajide Sanwo Olu has reaffirmed the commitment of his administration to the welfare of the families of late officers of the armed forces.

He said the labours of the heroes past would not be in vain.

Sanwo-Olu spoke at the 2022 Armed Forces Remembrance Day celebration and interdenominational divine service, at the Chapel of Christ the Light, Alausa, Ikeja.

The event with the theme: “I will heal their land”, was organised by the Ministry of Home Affairs.

It was attended by top government officials, including the leadership of the Christian Association of Nigeria (CAN), Lagos State chapter. Top officers of the armed forces and the police were also well represented.

The governor said the occasion provided an avenue to thank military officers for their commitment to ensure that the country remained safe.

Home Affairs Commissioner Prince Anofiu Elegushi said: “This gathering is to celebrate and remember our fallen heroes. Those that are no more and those that have any form of disability. Part of our celebrations is to give thanks to God for the nation, state and the armed forces. We are doing this to pray to God to heal our land and we believe He will do so.”

The Chairman, CAN, Lagos State branch, Rt. Rev. Steven Adegbite, thanked the governor for the hand of fellowship extended to the body of Christ, and prayed that God would uphold and uplift him.

The Executive Secretary, Lagos Anglican Schools Management Board, Ven. Victor Olusa, said despite the challenges confronting the country, “God has continued to answer our prayers.” 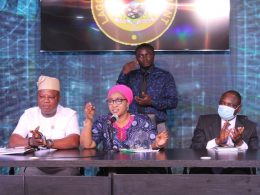 Lagos State Government is developing 100 hectares in Ejirin community in Epe division for the establishment of a Film City proposed by the administration of Governor Babajide Sanwo-Olu to boost the Creative and Entertainment industry.
byTayo Aderinola

The Lagos Commissioner for Tourism, Arts and Culture, Mrs. Uzamat AkinbiIe-Yusuf, and the Special Adviser on Tourism, Arts…
byTayo Aderinola