The Centre for Democracy and Development (CDD) in partnership with Premium Times Centre for Investigative Journalism (PTCIJ), has commended the Independent National Electoral Commission (INEC) over the conduct of the Osun governorship election.

According to the Preliminary Report made available on Saturday by the CDD Director, Idayat Hassan, in Abuja, CDD -PTCIJ deployed 180 trained and accredited observers for the poll.

The group said its observers reported that election materials arrived in Polling Units (PUs) on time in most PUs and the accreditation and voting processes commenced with minimal hitches to the voting process.

“CDD-PTCIJ observer reports indicate that on the average, accreditation and voting processes commenced at 8:19 a.m. across 122 polling units observed across the 30 LGAs.

“The voter turnout is impressive compared to previous off-cycle elections. We are hopeful it may be at par with the 53 per cent turnout recorded in the last 2014 governorship election in the state,” it said.

According to the report, the voting process went on smoothly without significant hitches.

“In few instances, there were minor glitches with the smart card readers (SCR), but INEC technicians were on hand to fix them, an example is PU 04 located at Oja Oke Open Space, the voting session was momentarily halted to fix an issue with the card reader.

“On the whole, however, the voting process commenced promptly and mostly went on peacefully as citizens exercised their franchise,” it said.

The report also revealed that the INEC’s new policy on vote buying was commendable.

“The ban of the use of mobile phones and other recording devices in voting cubicles by the Independent National Electoral Commission (INEC) largely thwarted blatant vote buying.

“In most of the polling units where we observed the ongoing election, voters willingly complied with the policy, and in a case where such attempt to violate the policy, law enforcement agents and INEC officials saw to its enforcement.

The group, however, commended INEC on what it called “the introduction of tactile ballots in the elections.”

The news of the transition of Chief Nathaniel Folarin Coker filled me with utter sadness. The Baba Eto…
byTayo Aderinola
No comments

President Muhammadu Buhari on Wednesday ordered the Inspector General of Police, Ibrahim Idris to stop the invitation of the People’s…
byTayo Aderinola
No comments 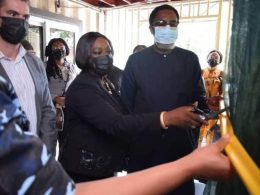 In a bid to decongest correctional facilities and ensure quick dispensation of justice, the Lagos State Government on Friday at Alausa Secretariat launched a restorative justice center and Secretariat of the Criminal Justice Sector Reform Committee (CJSRC).
byLateef Idris
No comments