Vice President, Professor Yemi Osinbajo has commended the Lagos State Government for establishing the Lagos State Employment Trust Fund (LSETF) through which loans are granted to small scale businesses and people with business ideas, saying that it was particularly laudable that over 12,500 new jobs were created within the first six months of the scheme.

The LSETF is an initiative of the State Government established by the administration of Governor Akinwunmi Ambode through which a total of N25billion is earmarked to be disbursed within four years to empower business owners with capital to revive moribund ventures, boost trade and as well help to start new ventures.

Speaking while delivering a keynote address at the Special Parliamentary Session to mark the third anniversary of the 8th Assembly of the Lagos State House of Assembly, Osinbajo said the LSETF, which was created in 2016, was an excellent example of how State Governments could intervene in creating opportunities for small businesses.

“At this point, I want to mention that the Lagos State Employment Trust Fund which was established in 2016 is an excellent example of State intervention in creating opportunities for small businesses.

“As of May 2018, 7000 loans totaling about N5billion have already been given out and 12,500 jobs were created even within the first six months of its operation.

“This is a very important initiative of the State Government and we think that it is important because it understands and addresses the concern of an important segment of our society – the young bright minds that require some capital to multiply their thoughts and trade,” Osinbajo said.

He said as part of measures to address poverty in the country, the Federal Government was already working on a scheme relating to the ETF through which loans would be given to small traders, adding that the initiative would commence in July.

“In the area of job creation, our party – the All Progressives Congress (APC) realized that we simply have to adopt a bottom-up economic model one where government directly intervenes by massive social investment programme in matters of poverty and this sort of programme addresses youth, especially graduate employment and credit to small businesses but especially credit to the smallest businesses like the one-table trader, the bread or plantain seller and so on. This is the largest segment of our working population.

“The smallest traders or petty traders, their inventory is usually not more than between N5000 and N10,000 but they are an important part of the value chain of goods that they sell. They are the ones who sell the single sachet of soap, sugar, spices and so on for the largest numbers of our people but they are forgotten and ignored in the economic plans and budget and they are considered too unhealthy or too risky for micro credit loans,” the Vice Preside said.

While alluding to Nigeria’s high poverty index, Osinbajo said the neglect of the smallest traders had contributed to the figures, but that the Federal Government was set to take care of people in such category by expanding the micro credit scheme to them.

“One of the reasons why our poverty figures are high is because of our large informal sector consisting of the petty traders whose income does not fit into the extreme poverty bracket but they are counted in a number because there is no way of tracking them up and right now, the plan of the Federal Government is to expand our micro credit programme to give smaller credit to this group.

“Eventually, they will open bank accounts under what we call Government Savings Account (GSA) and by giving credit to them, they can replenish and increase their inventories and give them a stronger chance to earn more while they also service the value chain that they are part of, and more importantly is that we bring them into the formal sector where they have access to government and private credit and we thereby lift more people permanently out of poverty.

“This is an important part of the Economic Growth Plan and we believe that by next month July, we should begin the disbursement of smallest micro credit – giving micro credit to the bottom of the pyramid,” Osinbajo said, adding that government was already working with major banks, telecommunication firms and payment companies.

In the area of youth employment, the Vice President aside the 200,000 graduates that have been engaged through the N-Power scheme, another 300,000 would be engaged by July, making the initiative the largest post-tertiary job programme in Africa.

Earlier in his remarks, Governor Ambode said it was gratifying that the three arms of government in Lagos have always worked together to show good example of promoting the tenets of democracy and what growth and development should be.

“The three arms of government in Lagos State have continually strived to ensure that we uphold the tenets of democracy and also create a clear example of what development and growth should be.

“We stand today as the shining example of what democracy should be and what actually development and growth should be and we are excited that in that collaboration we would take Lagos and also Nigeria to the rightful place it belongs,” Governor Ambode said. 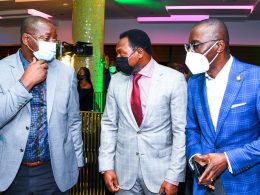 The Lagos State Government has been commended for the successes recorded so far at the ongoing Aisha Buhari invitational tournament also called the Aisha Buhari Cup.
byTayo Aderinola
No comments

Less than one month after his promotion to the rank of Assistant Inspector General of Police (AIG), former Benue State Commissioner of Police, who was later in charge of Armament, Omololu Bishi, has died.
byLateef Idris
No comments 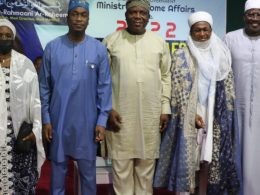 RAMADAN: Sanwo-Olu implores Muslims to pray for the Nation

Lagos State Governor, Mr. Babajide Olusola Sanwo-Olu, has implored Muslims to use the Ramadan period to pray for the country so that peace can reign, as it is only in a peaceful atmosphere that the nation can witness development.
byLateef Idris
No comments 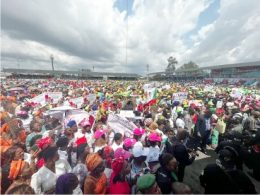 It was a massive turnout as over 10,000 All Progressives Congress (APC) women In Southeast marched for the party’s presidential flagbearer Asiwaju Bola Ahmed Tinubu and his running mate Senator Kashim Shettima in the state capital Owerri, Imo State.
byTayo Aderinola
No comments