The Central Bank of Nigeria, CBN, has instructed commercial banks in the country to work on Saturdays till Jan. 31, 2023, to enable bank customers to return old naira notes for new ones.

The Central Bank of Nigeria, CBN, has instructed commercial banks in the country to work on Saturdays till Jan. 31, 2023, to enable bank customers to return old naira notes for new ones.

Osita Nwasinobi, the Director, the Corporate Communications Department of the apex bank, stated this at the CBN fair in Ilorin on Thursday.

The fair was themed: “Promoting Financial Stability and Economic Development”.

He explained that the new and existing currencies shall remain legal tender and circulated together until Jan. 31, 2023, when the existing money shall cease to be legal tender in Nigeria.

Mr Nwasinobi, who was represented by Akpama Uket, the Acting Director, Corporate Communications, CBN, said that Deposit Money Banks, DMBs, have been directed to immediately start returning the existing currencies to the CBN.

“They have also been instructed to receive the existing banknotes beyond the threshold stipulated by the Cashless Policy without charges to customers.

“Consequently, you must return all the current N200, N500 and N1,000 banknotes to your bank before the expiration of the deadline,” he said.

The CBN boss said that the redesigning of the Naira notes was for macroeconomic stability.

He said the aim was to build a strong, stable and resilient economy that is self-sustaining and ability to weather unanticipated shocks.

“The bank will achieve this by applying appropriate monetary policy tools, reining inflation and continuously encouraging a productive economy through interventions.”

Recall that the CBN has announced plans to redesign, produce, release and circulate new series of three banknotes, out of the existing eight banknotes.

These are the N200, N500 and N1,000 denominations, which will take effect from Dec. 15, after its launch by President Muhammadu Buhari.

The CBN also warned Nigerians of the consequences of mishandling the Naira notes.

“The Naira remains a symbol of our national pride. Treat it with utmost dignity.

“Do not spray, squeeze or counterfeit the Naira, as default goes with consequences,” Mr Nwasinobi warned. 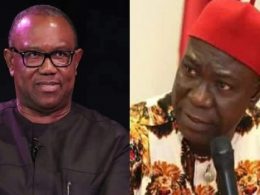 The Presidential candidate of Labour Party (LP), Peter Obi has reacted to the arrest of former Senate Deputy President, Dr. Ike Ekweremadu and his wife, Beatrice Nwanneka in the United Kingdom.
byTayo Aderinola
No comments 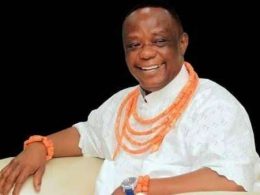 Captain Hosa Okunbor dies at 63, what you need to know about him

Edo State-born business mogul and Chairman of Ocean Marine Solution Limited, Captain Hosa Okunbor, is dead. He died in a London hospital at the age of 63 after battling with pancreatic cancer.
byTayo Aderinola
No comments 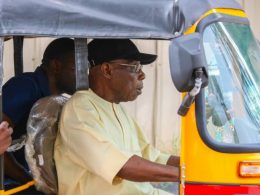 The former President, Chief Olusegun Obasanjo, on Saturday, practically turned a commercial tricycle rider, known as ‘Keke’ in Abeokuta, Ogun State capital, in demonstration of safety of the means of transportation.
byLateef Idris
No comments