A content producer who specializes in the business of events productions, promotions and marketing with particular focus on comedy, Femi Edwards has dragged telecommunications firm, MTN Nigeria Limited before a Federal High Court in Lagos demanding account of N112.5 billion revenue allegedly generated from the wrongful use of a comedy brand.

According to the suit, the plaintiff is accusing MTN of illegally using his comedy content without recourse to him, and generating whooping revenue from the said copyright infringement.

Edwards, who is trading under the name and style of Mayphem International, recalled that in 2009, he started a platform that promotes the comedy industry called ‘KomicRELOUDED’ which according to him, was a print magazine widely accepted by the industry.

The plaintiff, in the suit with reference number FHC/L/CS/18/18, averred that in the following year, he rebranded to ‘Comedy+’, adding that he had been maintaining the brand ever since with sales outlets across Nigeria.

He said leveraging on the success of the brand ‘Comedy+’, he went into the business of organizing comedy shows and concerts throughout the country, and that over the years, the brand ‘Comedy+’ and ‘ComedyPlus’ have come to be associated with him as signifying publications, comedy shows, entertainment and other events produced, promoted or marketed by him or with his collaboration in both physical and digital platforms, print and electronic media, with substantial reputation by the use of same.

However, the plaintiff said on March 17, 2017, MTN launched a digital platform tagged ‘Comedy+’ where it advertised the intent to and where it has continued to wrongfully produce, promote, market and pass off comedy shows and other entertainment without recourse to him as the copyright owner of the brand.

Edwards said to his surprise, several comedy artists and members of the public had called to congratulate him on the launch of the digital comedy platform of MTN under the belief that he was the person behind it, adding that being a huge commercial enterprise, MTN wrongfully acquired mileage from a popular brand which he created, to launch into the budding comedy sector in Nigeria.

He said the comedy industry had been in its developing stages in Nigeria, and that the brand which he struggled to create, was wrongfully leveraged on by MTN to generate a whooping N112.5billion.

“The defendant has profited from the passing off of the services and the products of the plaintiff in the excess of N112.5billion as presently known to the plaintiff until search, discovery and inspection.”

Giving details of how the figure was arrived at, the plaintiff said his ‘Comedy+’ brand was passed off by MTN to its subscribers which number up to 59 million, while from the defendant’s subscription price list, at the cheapest rate of N250 per month, MTN made N112.5 billion in nine months between March to December 2017 with the number of subscribers limited to 50 million and discounting 9 million.

Dissatisfied with the development, the plaintiff said he wrote to MTN through his lawyer on September 12, 2017 complaining of the passing off of his brand, and that the company replied on September 18, 2017 promising to look into the complaint.

After waiting for some time without response, the plaintiff said he wrote again to the firm, while on October 23, 2017, MTN responded and denied absolutely any liability, but without denying its use of the brand or trade name ‘Comedy+’.

The plaintiff, according to the suit filed on his behalf by Chuks Nwachukwu of Indemnity Partners Law Firm, is therefore seeking an injunction restraining MTN whether by itself, servants, agents or otherwise howsoever from producing, promoting or marketing under the brand name ‘Comedy+’ any comedy related or other entertainment shows or content not produced, promoted or marketed by the plaintiff or with his collaboration.

The plaintiff also wants an injunction mandating MTN to render account of profits and receipts so far made using the brand ‘Comedy+’, as well as damages for the wrongful use of the brand.

Already, the matter has been assigned to Justice Chuka Obiozor who has fixed hearing of an application for interlocutory injunction in the suit against MTN to October 29, 2018.

The National Leader of the All Progressives Congress (APC) Asiwaju Bola Tinubu, has called for the immortalisation of…
byTayo Aderinola
No comments 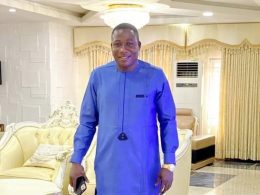 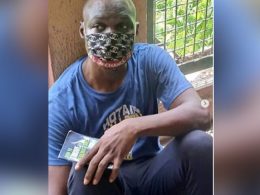 Trial Of Baba Ijesha stalled due to absence of prosecution witnesses

The trial of Nollywood Actor, Olanrewaju James popularly known as Baba Ijesha was stalled at the Lagos State Sexual Offences Court in Ikeja, the state capital.
byTayo Aderinola
No comments

The UK announced 684 more coronavirus deaths on Friday, more than the 569 on Thursday. The new fatalities…
byTayo Aderinola
No comments