No fewer than 2.2million vehicles came to Lagos in search of fuel, The Nation has learnt.

According to the Executive Secretary, Major Oil Marketers Association of Nigeria (MOMAN), Obafemi Olawore, the figure would have been higher had the Federal Government not made efforts to halt the trend.

He said the figure represents the number of vehicles that came from different states in search of fuel at a relatively cheaper price. He said motorists from other states decided to come to Lagos to buy fuel, following their inability to get the commodity at between N150 and N200 per litre from the black market.

While stating marketers’ position on the lingering fuel scarcity during a meeting organised by the Products Petroleum Marketing Company (PPMC) to proffer solutions to the issue, Olawore said the number of vehicles that came to Lagos to buy fuel  increased by one million from 1.2million to 2.2million.

He said: “Lagos officially has 1.2million vehicles on its roads.  However, the figure has increased greatly, due to influx of vehicles into Lagos from other states. Findings have shown that the number of vehicles that flowed into Lagos at the height of the ongoing fuel scarcity has increased to 2.2million. The reason is that fuel is normally scarce outside Lagos, so whenever problems occur in the supply/demand chain of the petroleum product, the only option left for fuel users, especially owners of vehicles is to come to Lagos to buy fuel.”

Olawore said it is extremely difficult to ensure a steady supply of fuel in Lagos, despite efforts made by the government to solve the problem. He said Nigeria will achieve positive results in the area of fuel supply when one considers the huge volumes of fuel imported into the country by the Federal Government in recent times.

In a related development, the Executive Director, Supply and Distribution, PPMC, Mr. Justin Ezeala, said arrangements are being made to remove major oil marketers from the Nigerian National Petroleum Corporation (NNPC) fuel importation programme, adding that such marketers would start importation of fuel into the country soon.

He said marketers would bring cargoes of fuel into the country once they firm up arrangements with some international organisations that will supply them with foreign exchange for fuel importation.

Lagos is noted for its huge vehicular traffic. Being the nation’s commercial nerve centre, Lagos is used to traffic as vehicles flowed into the city from different parts of the country. However, Lagos recorded an unprecedented vehicular traffic in the last three weeks, due to fuel scarcity.

Though the government had taken delivery of seven cargoes of fuel last week end and also promised to import more fuel with a view to make the product available to users, the problem persists.

Elated Nigerians on Saturday cheered the Minister of Transportation, Mr Rotimi Amaechi and the Minister of Information and Culture, Alhaji Lai Mohammed as the duo inspected the Lagos-Ibadan standard gauge rail project.
byTayo Aderinola
No comments 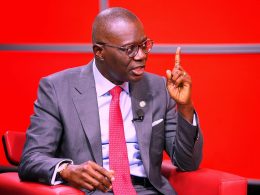 Riding on Lagos Blue and Red Lines will be affordable, tickets to cost N200 – N300 per trip- Sanwo-Olu

Lagos State Governor, Mr Babajide Sanwo-Olu has assured that riding on Lagos Red and Blue Lines rail system will be affordable and cost-effective to passengers.
byTayo Aderinola
No comments

President Muhammadu Buhari on Tuesday at the 72nd Session of the UN General Assembly in New York, urged…
byTayo Aderinola
No comments