No fewer than 52 pharmacies, patent medicine shops and unlicensed premises at Isolo, Egbeda, Ikotun, Bariga and Somolu in Oshodi-Isolo, Alimosho and Somolu Local government areas of Lagos were sealed by the Lagos State Taskforce on Counterfeit, Fake Drugs and Unwholesome Processed Foods for offences bordering on illegal operation and operating beyond scope, amongst others.

The Permanent Secretary, Lagos State Ministry of Health, Dr. Titilayo Goncalves, who disclosed this today when she received the report of the operation by the Task Force, explained that the affected pharmacies and patent medicine shops indulged in the practice of operating without licence, engaging unqualified persons to man and dispense drugs to unsuspecting citizens, operating beyond scope through sale of unethical products as well as displaying and storing drugs in unconducive environments which compromise the potency and integrity of the medications, rendering them ineffective.

“Although some of the pharmacies visited were registered, it is disheartening to note that quite a number of them had no qualified pharmacists on duty and displayed expired drugs for sale to the public”, she said.

The Permanent Secretary noted that some of the premises visited also engaged in illegal clinical practices such as patient admission and setting of intravenous infusions, adding that such practice is unacceptable. She vowed that the State Government will do whatever is necessary to enforce the law and sanction erring operators.

In her words, “The sealing of the affected pharmacies and patent medicine stores was in accordance with the provisions of Section C34 of the Counterfeit, Fake Drugs and Unwholesome Processed Foods Miscellaneous Provision Act of 1999, No. 25”.

While stressing that the recent operation of the taskforce was coming on the heels of the war being waged against fake drugs and illegal drug shops, Goncalves warned that the activities of the State Task Force on Fake Drugs would not only be sustained, but intensified until operators in the sector adhere strictly to the provisions of the law on the operation of pharmacies and patent medicine shops, in order to safeguard the health of the citizenry.

Speaking in the same vein, Director of Pharmaceutical Services in the Ministry, Dr. Moyosore Adejumo said that the State Government will not relent in its efforts to stop the inherent dangers associated with the operations from unlicensed pharmaceutical outlets and drug shops.

She added that the Task Force, through the Pharmaceutical Inspectorate Unit (PIU), of the Pharmaceutical Services Directorate has been re-energised to intensify the on-going war against fake, expired and substandard drugs being peddled by unlicensed and illegal premises.

“This closure is thus part of the government’s renewed efforts to sanitise the drug distribution system and curb proliferation of fake drugs in the State”, Adejumo said.

She explained that an investigative meeting would be held with owners of the sealed premises to make further inquiries on the status of their outlets and to notify them of the procedures and requirements for reopening their shops in line with government regulations as well as payment of the administrative fee.

The enforcement and compliance raid by the State Taskforce on Counterfeit, Fake Drugs and Unwholesome Processed Foods was carried out in collaboration with the National Agency for Food Drug Administration and Control (NAFDAC), Pharmacists’ Council of Nigeria (PCN), Pharmaceutical Society of Nigeria (PSN), Federal Taskforce on fake drugs and the Police Officers from Environmental and Special Offences Unit (Task Force) of Lagos State Police Command. 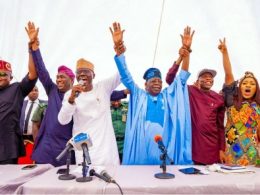 All Progressives Congress (APC) Presidential Candidate and National Leader, Asiwaju Bola Ahmed Tinubu, returned to his political base for the first time after winning the party’s presidential ticket in fiercely contested primaries.
byTayo Aderinola
No comments SIR: We implore the appropriate authorities would see and rescue us from the attempt by Ikeja Electric to extort from…
byLateef Idris
No comments

To further increase land availability for housing and infrastructure development, the Lagos State Government has expressed the desire…
byTayo Aderinola
No comments