A bill for a law to amend the Lagos State Independent Electoral Commission (LASIEC) Law 2015 and for connected purposes was passed by the Lagos State House of Assembly at plenary yesterday.

The bill was amended to give room for more participation and flexibility for LASIEC and political parties in order to aid smooth electoral delivery.

The Majority Leader, Sanai Agunbiade who moved the motion stated that the amendment of some sections which include Sec.28 and Sec. 62(i) is to seek time within which particular electoral activities could be done.

Speaker Mudashiru Obasa emphasized that the essence of the bill is to create more legislative participation and flexibility for LASIEC to give room for adjustment in carrying out their activities and for political parties where necessary.

In his contribution, Chairman house committee on finance, Lanre Ogundimu said the amendment would create clarity and remove all forms of ambiguity in the law.

The bill had an accelerated passage as it went through the first second and third reading at plenary before being passed.

Majority leader, Sanai Agunbiade recommended the accelerated passage of the bill in accordance with section 101 of the constitution of the federal republic of Nigeria which empowers the various houses of assembly in the country to regulate its proceedings as well as the standing order of the state house of assembly which empowers the house to abridge time of passage of bills before it.

The Speaker directed the Clerk of the House, Mr. Azeez Sanni to send a clean copy of the bill to Governor Akinwunmi Ambode for his assent. 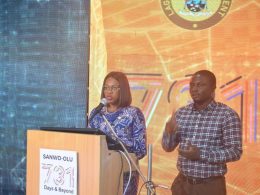 The Lagos State Government has paid N14.71billion as accrued pension rights to 3,494 retirees, an official has said. Besides, N4,203,784,514.49 was paid through the Defined Benefits Scheme, otherwise known as 'Pay As You Go', between May 2019 and March 2021 to ensure that those who retired from the Civil Service enjoy life after diligent service to the State.
byTayo Aderinola
No comments

Buhari tasks security chiefs on safety of all citizens