Ambode sure of fiscal federalism

Gov. Akinwunmi Ambode of Lagos State has expressed optimism for the realisation of the entrenchment of fiscal federalism as the only way to achieve true nationhood.

Ambode said on Tuesday at a public lecture with the theme, “Restructuring: An Antidote for Effective and Efficient Polity’’, to commemorate the 25th anniversary of the annulled 1993 Presidential election.

“Our present democratic experience may still be far from ideal but we are absolutely convinced that it is the right way to go for us to realise the optimum potential and prosperity of the federating states and the nation.

“On this historic day, I am convinced more than ever before that this ideal will be realised sooner than we can imagine,’’ Ambode said.

The governor said that the theme of the celebration was apt as it dwelt on the real topical issues bedeviling the country.

“The theme of this historic edition of June 12 celebrations speaks for itself. As a state and people, our stand on a restructuring process that will lead to fiscal federalism, devolution of power is very clear,” he said.

“By this singular act, including the award of the Grand Commander of the Order of the Niger on the fearless Human Rights Activist, Late Chief Gani Fawehinmi, President Muhammadu Buhari has written his name in Gold in the political history of Nigeria.

“We salute President Muhammadu Buhari for demonstrating exceptional courage to stand by justice and the truth,’’ he said.

Ambode said that June 12 was a day Nigerians demonstrated unity and put aside ethnic and religious biases to speak overwhelmingly with one voice.

“Sadly, the aspiration of Nigerians expressed through the ballot was truncated by the military.

“Since then, the struggle for democracy has been relentless, championed by progressive Nigerians, men of character and courage, who challenged the military junta.

“You can imagine our delight when the President announced the recognition of June 12 as the authentic Democracy Day in Nigeria.

“This formal recognition is a crown of victory to the struggle that had taken the lives of so many nationalists and patriots,’’ he said.

The governor saluted all those who stood for the actualisation of June 12 and also paid tributes to the memories of patriots who died in the struggle.

“Dr Beko Ransome-Kuti, Gen. Adeyinka Adebayo and several others, including innocent ordinary Nigerians, young and old, who were murdered in cold blood on the streets of Lagos and in other major cities of Nigeria.

“Today, we declare that their sacrifice has not been in vain,’’ Ambode said.

As part of activities to mark the 25th anniversary of the annulled June 12 Presidential election in Lagos, the state government held the 25th edition of the June 12 Annual Lecture and unveiled a 37-ft statue of the late MKO Abiola at Ketu-Alapere, Lagos.

Earlier in his lecture, Dr Dele Ashiru of the Political Science Department, University of Lagos, advocated a review of the constitution and a special status for Lagos State.

According to Ashiru, there have been a number of structural deficiencies since the emergence of the Nigerian state.

He said that the structural imbalance had led to many problems including corrupt practices, armed robbery and other crimes.

“How do we restructure? It has to be more fundamental than cosmetic restructuring.

“It has to be at the level of politics, governance, education and so on,’’ Ashiru said.

He also called on leaders in all political offices to learn to live and uphold the ideals that Abiola represented while he lived.

Also speaking, an Activist, Mr Linus Okorojie, commended the state government for its continued support for the June 12 struggle.

Okorojie also commended President Buhari for the declaration and for according Abiola the highest national honour.

“The Federal Government must however, go further to conclude the process by asking INEC to announce the result of the I993 Presidential elections and proclaim MKO Abiola winner, posthumously,’’ he said. 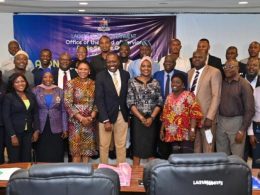