Chairman of the Lagos State Task Force, CSP Olayinka Egbeyemi disclosed that the 50 arraigned suspects, including four girls attacked officials of the Lagos State Building Control Agency (LASBCA) while on official duties demolishing illegal shanties erected on acquired land and set fire on a caterpillar belonging to the government.

Egbeyemi disclosed further that LASBCA officials were attacked with stones, Iron-rods, broken bottles and burnt tyres before the arrival of the enforcement team of the Agency who rescued them.

He said investigation revealed that owners/occupiers of the illegal shanties were served necessary notices and were given months to evacuate all their belongings from government’s approved land for ‘Dangote Refinery’ around the area.

The Chairman stated that government’s caterpillar, worth millions of naira used for clearing the illegal shanties was completely set ablaze with petrol by the suspects.

Egbeyemi said the suspects were arraigned on the directive of the Lagos State Commissioner of Police, Edgal Imohimi.

He said the commissioner directed him to arrest and prosecute any members of the public who vandalized government’s properties across the State.

Egbeyemi said Imohimi, however, implored members of the public to always protect government’s properties within their area as anyone caught vandalizing public properties, including iron-mesh used for road demarcation along expressways would be seriously dealt with in accordance with the law.

One of the arraigned suspects, Henry Agbor, 45, who hailed from Abia State appealed to the government to tamper justice with mercy as they were mobilised with different weapons by owners of the illegal shanties to carry out the barbaric acts.

Meanwhile, the suspects were arraigned on a 4-count charged of arson, conspiracy, conduct likely to cause breach of peace and unlawful obstruction.

The Chief Magistrate, Osunsanmi, however, on application remanded the 50 suspects in prison and immediately referred the case file to the Directorate of Public Prosecution (DPP) for legal advice on the matter due to one of the charges, arson, which carried  life imprisonment sentence. (PM NEWS)

The Independent National Electoral Commission, (INEC), on Thursday afternoon began the distribution of sensitive materials in readiness for…
byTayo Aderinola
No comments 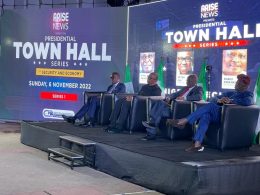 The Presidential Campaign Council (PCC) of the ruling All Progressives Congress (APC) has faulted the criticism of the two leading opposition parties on the absence of Asiwaju Bola Ahmed Tinubu at the Sunday night Arise TV presidential candidates debate.
byTayo Aderinola
No comments