The Corps Public Education Officer, Bisi Kazeem, said in a statement on Sunday that the woman gave birth to a baby boy immediately after she was rescued “At about 7:30 a.m.

“In the vehicle were two suspected kidnappers (male) and a pregnant woman who was their victim.

“The pregnant woman, who had body injuries, was rescued to Ola-Oki Hospital, Ibereko, where she immediately gave birth to a baby boy,’’ he said.

Kazeem said it took the prompt intervention of soldiers to rescue the suspects from a mob that had attempted to attack the suspected kidnappers.

A Karu Grade 1 Area Court in Abuja on Monday sentenced a rejected suitor, Emmanuel Egbo, to…
byTayo Aderinola
No comments Why Tinubu Will Choose a Muslim Running Mate

There is probably no other politician in Nigeria today who recognizes the imperative of choosing a Muslim from the north of Nigeria as his running mate for the 2023 presidential election as Asiwaju Bola Tinubu does.
byLateef Idris
2 shares
2
0
0
No comments 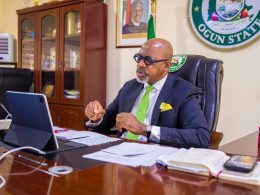 Ogun State governor, Dapo Abiodun, says the state government is looking for investors that will develop its tertiary health facilities to a world class health institutions capable of providing quality healthcare services to the people.
byTayo Aderinola
13 shares
13
0
0
No comments