President Buhari had last week announced that henceforth, Democracy Day in Nigeria will be celebrated on June 12 and not May 29 each year.

Several individuals and groups who played prominent roles pushing for the actualisation of June 12 and its proclamation as Nigeria’s Democracy Day witnessed the event which held inside at the conference centre of State House Villa, Abuja.

In 2008, Mr Fawehinmi refused national honours when announced for him by former President Umar Yar’Adua. He died in September 2009 and his family rejected a similar honour during Nigeria’s centenary celebrations in 2014. The family said last week the latest award appropriately honoured the memory of Mr Fawehinmi and, therefore, accepted it from Mr Buhari.

President Buhari presented the posthumous award of the Grand Commander of the Order of Niger on Mr Fawhinmi as received by his wife.

Kola Abiola received the award on behalf of the family. Posthumous award of the Grand Commander of the Federal Republic, Nigeria’s highest honour was presented by President Buhari to the winner of Nigeria’s freest and fairest election of June 12, 1993 Chief Moshood Kashimawo Olawale Abiola.

President Buhari in his speech noted; “This event is not to open old wounds, but to put light on the nation. The government (of Ibrahim Babangida) inexplicably cancelled the (June 12, 1993) election when it was clear who was the winner. We cannot right the past but we can at least assuage our feelings. Nigerians will no longer tolerate such perversion of justice. Our decision to honour June 12 is in national interest,” the president says.

June 12, 1993 was the day Nigerians chose the path to national unity, rather than ethnic eyes.

“We redefined Nigeria through the ballot box,” Mr Kingibe says. “It is possible to revive the spirit of June 12 if we could imbibe democratic principles.” Mr Kingibe is very close to Mr Buhari, and he is amongst his closest alies at the State House. He says the decision to honour MKO Abiola and recognise June 12 came “naturally” to the president.

Frank Kokori, a frontline labour leader who was amongst the advocates of June 12, says Mr Buhari was the least person expected to honour Mr Abiola’s memory, saying it was a confirmation that the president “has a great soul”.

“If this is coming 25 years later, it means one day your your country will remember you because some of us felt when we came out of Abacha’s gulag and we were not recognised,

“I just felt what sort of country is this. Like my personal experience as one of the most famous prisoner of conscience in the world, I saw that my country did not even appreciate the four years I spent in one of the worst cells in the world. And we did all these for our country and the country did not recognise us,” Mr Kokori tells reporters on the sidelines of the event.

Mr Fawehinmi’s eldest son, Mohammed, says his late father would have accepted the award because June 12 was actualised. The late Mr Fawehinmi was amongst the biggest voices for the realisation of Mr Abiola’s mandate. “I feel very elated, I feel very proud, my family feels very honored that all the suffering was not in vain and that the Nigerian people have a chance of better governance in future,” Mohammed Fawehinmi says to reporterss.

“One, because June 12 was actualised. Two, because M.K.O. Abiola was recognised as president-elect. And you can see from the suggestion at the Senate that they are going to eventually declare the election result and he is going to be given all his benefits after 25 years which he has lost. So, for that reason that is victory for him because he went through hell and high waters to make sure that June 12 was actualised,” he said.

Ganiyat Fawehinmi, the later activist’s wife who accepted the honour on behalf of the family, recalled the past ordeal of the family that now makes today a remarkable one.

“I was a bit disturbed. Every time the security will come, turn our house upside down, even his office was broken into, they took away many files during Mr Babangida’s regime and they were not returned till date. So I just thanked God that I am alive to witness today and I know that my husband will turn in the grave for this June 12 that is being actualised because he really fought and died for it” she noted.

“I believe God has a purpose for it, I believe that is how God wants it because you can’t run a race ahead of God. So, God has a purpose of actualising it today which is exactly 25 years after Hole ‘93 when Abiola wanted to be the President,” Mrs Fawehinmi tolds reporters at the event.

Mr Kingibe, in his acceptance speech, describes M.K.O. as the messiah Nigerians never had.

Mrs Abiola-Costello, says Mr Buhari was amonst the least expected person to honour Mr Abiola because of their unsavoury history.

She accepts the honour on behalf of the family and says it is worth it, especially for a family which gave a lot.

Her mother, Kudirat Abiola, was amonst those who died struggling to reclaim the mandate given to Mr Abiola in the 1993 election. She was killed in a suspected assassination in Lagos in 1996.

Ayo Obe, a rights campaigner, also takes the stage to announce the names of those who died in the civil society struggle.

Alfred Rewane, a nationalist, was also assassinated during the struggle by suspected elements of the state under Sani Abacha.

Bayo Onanuga, who speaks for the media’s aspect of the June 12 struggle, says it is never too late to right the wrong of history.

He says Mr Buhari did well by recognising Mr Buhari and the spirit of June 12, saying he should ignore detractors, most of whom were never a part of the struggle to begin with.

Mr Onanuga, who worked at TheNews Magazine during the June 12 struggle, is now the head of News Agency of Nigeria, appointed by Mr Buhari.

He says the June 12 that is currently being celebrated brought Nigerians together was grossly violated and, therefore, set Nigeria back decades.

He says Mr Buhari’s final recognition of June 12 shows that the struggle can not be buried.

Amongst the royal fathers at the event are Alaafin of Oyo, Lamidi Adeyemi, and Alake of Egbaland, Aremu Gbadebo.

Frank Kokori, a labour leader, says the resistance that followed the annulment of June 12 was pivotal.

He cites examples of freedom fighters in Mozambique, Namibia and South Africa where

Mr Kokori says his labour comrades did a lot of work as the arrowhead of the struggle against military dictator in the 1990s.

Mr Kokori drops a bombshell, saying he was appointed by Mr Buhari to head the Nigerian Social Insurance Trust Fund nine months ago, but has not been sworn into office.

“I was treated with such ignominy,” he says.

Femi Falana says he was detained at Kuje Prisons during the June 12 struggle.

“We had seven presidents that pretended the June 12 did not exist,” the rights activist says.

“I urge you to direct all security of all security forces in Nigeria, including the police, to respect the fundamental rights ot Nigerians in the spirit of June 12,” Mr Falana adds.

He also demands an end to the senseless killings across Nigeria.

His comments come against the backdrop of recent violent attacks in central Nigeria and other parts of the country, as well as the attacks on everyday citizens linked to police Special Anti-Robbery Squad, SARS.

“You cannot honour Abiola in one breath and admire his tormentor in another breath,” Mr Soyinka says.

Someone who if alive would be standing trial at the International Criminal Court, he says.

Mr Soyinka proposes a hall-of-shame for past Nigerian leaders who were infamous for their brutality to sound as a warning note to would-be bad leaders.

Mr Soyinka says all the unsung heroes of the June 12.

Amongst them was a man he described amongst the “instigators of physical confrontations against dictators, Comrade Ola Oni.”

Mr Soyinka says he was “knocked out of my throat” by the apology rendered by Mr Buhari for the June 12 atrocities of Nigerian past dictators who were responsible.

He says he was on his way to Brazil when he was “literally yanked off” the plane and dragged to the event at the State House, Abuja, today.

Bola Tinubu in his speech stated, “If a man with military background and a professor of law put heads together to set the record straight and create that hope that Nigeria can truly be committed to democracy and justice shows that you are a great leader” he said of President Buhari and Vice President Osinbajo.

Mr Tinubu extols the virtues of Abu Ibrahim, a serving senator from Katsina State, who was released from custody during the June 12 struggle but refused to go home until all his colleagues gain equal freedom.

Analysts are going to come up with all sort of reasons why you decided to do this, but you did it, the former Lagos governor tells Buhari

I know a president who would have looked at me and through me out of the helicopter down in the jungle for mentioning June 12, he added without naming names.

A former Speaker of the House of Representatives, Agunwa Anekwe, recalled how Nigeria’s third republic was truncated in 1993.

He said the struggle led to the carting away of the mace at the National Assembly by him and other lawmakers at the time.

“Mr President, you have honoured not just M.K.O. Abiola, but every one who died in the struggle for June 12,” he said.

He noted that a major lesson that must be learnt is that if the people like a candidate, no matter the machinations, the individual will emerge victorious.

Iyorchia Ayu, a former Senate President, said Mr Buhari’s singular action might have erased the wrongdoing of his predecessors, especially the dictators responsible for the June 12 infamy.

He said that the decision to recognise Mr Abiola is “simply symbolic.” But the decision was actually a recognition of the the collective values of Nigerians.

” I appeal to you to respect the democratic tenets, the rule of law, the freedom of expression.

He asked Mr Buhari to “please have a heart to know that the opposition is not an enemy in a democracy.”

He said his father was a soldier and he understood the instinct of persons with military background.

Mr President, people have the notion that you are not forgiving, that you are intolerant of opposition, but I do not always believe this, I believe you have a large heart.

Your worse enemies are people who are around you who turn every Nigerian against you, but the people are actually your friends, Mr Ayu said as he concluded.

The All Progressives Congress (APC) has appointed Lanre Issa-Onilu as its new national spokesperson. The appointment was made…
byTayo Aderinola
No comments 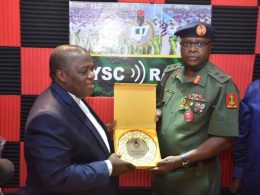 The Lagos State Deputy Governor, Dr Obafemi Hamzat, on Tuesday revealed how Gov. Babajide Sanwo-Olu and himself were…
byTayo Aderinola
No comments