The Independent National Electoral Commission, INEC, on Monday issued an amended timetable and schedule of activities regarding the recall of Dino Melaye, an All Progressives Congress senator representing Kogi West at the National Assembly.

The commission disclosed this in a statement by its secretary, Augusta Ogakwu.

The INEC had released a timetable for Mr. Melaye’s recall last July; but a court order, following a suit instituted by the senator, halted the process pending the determination of the case.

But last week, an Abuja Division of the Federal High Court ordered the continuation of Mr. Melaye’s recall, holding that the electorate whose petition resulted in the process had a right to request the removal of their senator from office since they are the ones who elected him in the first instance.

The court also held that the constitution does not require a special provision that mandates the INEC to grant the senator an opportunity for fair hearing.

The court then ruled that the INEC provides Mr. Melaye with the recall petition, a schedule of signatures attached to the petitions, and a full list of persons in support of the recall process, within two weeks before an amended timetable for the recall would be made.

In fixing the new timetable, the INEC said enough time had been given for the senator to study the petitions and other attachments to enable him to prepare for the exercise.

The table showed the notice of verification will begin on October 3, while the last day of submission of application by observers will be October 5.

The publication of the list of accredited observers will be on October 9, following which there will be a stakeholders meeting at both the senatorial district headquarters and the local government headquarters on October 10.

The last day for submission of names of polling agents for verification by the lawmaker to be recalled and representatives of the petitioners will be on October 12.

The final verification will hold on October 14, according to the INEC timetable.

A container fell off a truck Wednesday and landed on a car at the Anthony Village ramp, in…
byLateef Idris
No comments

The Managing Director, Lagos Ferry Services LAGFERRY), Mr. Abdoulbaq Ladi-Balogun has expressed the readiness of the Agency to…
byTayo Aderinola
No comments 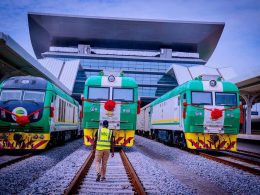 We are pleased to inform you of our holiday trips starting from 20th December 2021 to the 9th of January 2022.
byTayo Aderinola
No comments

We profile the two major candidates battling it out for the governorship throne in Ekiti State. On Saturday,…
byTayo Aderinola
No comments