The Presidential Candidate of the All Progressives Congress, Asiwaju Bola Ahmed Tinubu, has declared that mentioning the name of the Deputy Governorship Candidate of the Peoples Democratic Party in Lagos State, Funke Akindele, (in his presence) is an insult.

The Presidential Candidate of the All Progressives Congress, Asiwaju Bola Ahmed Tinubu, has declared that mentioning the name of the Deputy Governorship Candidate of the Peoples Democratic Party in Lagos State, Funke Akindele, (in his presence) is an insult.

Sanwo-Olu led all members of the State Executive Council to the meeting presided over by the Lagos APC Chairman, Pastor Cornelius Ojelabi at the Lagos APC Secretariat on Acme Road in Ogba on Wednesday for the party’s Stakeholders meeting.

Governor Babajide Sanwo-Olu while addressing the gathering said “In this particular place, Asiwaju has raised many people’s hands. Nobody ever knew that a day like this would come when his hand will be raised“.

The party supporters at the headquarters on ACME Road in Lagos roared in appreciation of the Jagaban Borgu’s selflessness and doggedness.

The APC Presidential Candidate addressed the gathering in Yoruba, Tinubu said, “don’t even behave as if you remember that name (Funke Akindele).

“It is a big insult, it is an abuse. A fowl wants to enter a house, it is bending down, how tall is it in the first place?”

Tinubu told the gathering that he returned to his political base to meet the Lagos APC family stronger than he left it. He said those entrusted with the administration of the party affairs after he weaned himself off the supervisory duty had not made him regret his decision to pursue his presidential ambition.

Tinubu passed a vote of confidence on Sanwo-Olu and other party leaders for nurturing the APC political machinery in the state, stressing that the party remained unbeatable in Lagos.

He said, “I left Lagos for Abuja, leaving the party members with Sanwo-Olu, Hamzat, leaders of the Governor’s Advisory Council and other party leaders. They are the ones who released me to go to Abuja to contest. I left with many doubts and I was uncertain about what would be the fate of the party. I was constantly in touch with the Governor and his deputy.

“Sometimes, I would call the party chairman and ask them if we were doing the right thing in Lagos. The reports they always gave me, gave me more courage and confidence to move on with my engagement in Abuja. I thank all of our leaders for keeping the party stronger. I handed over to you an undefeated platform in Lagos. The manner with which the party affairs have been conducted shows these people have fairly managed the home base.”

Tinubu recalled that his journey to secure the party’s presidential nomination in Abuja was littered with uncertainties, but said the support raised from Lagos APC leadership boosted his confidence to move on and win the primary.

The party’s National Leader said he was in the presidential race to win, but said his fate was in the hands of the party members who, he said, must work hard to get votes for the party at the polls. 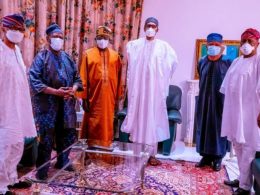 Coronavirus: No plan to mobilise for NYSC anytime soon – DG

The film adaptation of Wole Soyinka’s classic autobiographical novel, “Ake: The Years of Childhood”, is now available to…
byTayo Aderinola
No comments