How I surrendered my right to Osinbajo in 2015: Tinubu speaks

Bola Tinubu, on Thursday, confirmed that President Muhammadu Buhari gave him the offer to become Vice-President in 2015 but he surrendered the position to Yemi Osinbajo.

Bola Tinubu, on Thursday, confirmed that President Muhammadu Buhari gave him the offer to become Vice-President in 2015 but he surrendered the position to Yemi Osinbajo.

The presidential aspirant and national leader of the All Progressives Congress narrated the story by himself for the first time while addressing the APC delegates at the Presidential Lodge in Abeokuta.

The APC leader, who was accompanied to Ogun by the Lagos State Governor, Babajide Sanwo-Olu; his Kano State counterpart, Umar Ganduje, and former Borno State governor, Kasim Shettima, said he surrendered the position for the unity of the party.

“You have not heard this from me before. This is the first place I am saying this,” Tinubu who addressed the delegates in Yoruba said.

“This is me telling you between me and God Almighty, Buhari called me to be his Vice President. He said because the first time he contested, he picked Okadigbo, flamboyant, catholic, but Nigerians didn’t vote for him.

“He knew all the calculations then favoured us, that is why he wanted me as his vice, but I told him to let us build the party first. And when we finished building the party after we brought in people from the PDP, Saraki now saw that those from the PDP will not get anything if Buhari, a Muslim becomes the president and me, also a Muslim becomes his vice, he won’t get the senate president and the senate president cannot also be a Muslim, that was how they started the campaign of calumny against me.

“And I told them that I have a candidate that is a Christan that I can nominate so that the party will not break, that was how I nominated Vice President Yemi Osinbajo. I surrendered my right to him (Osinbajo).

Speaking on why he is the best choice among other aspirants, he said, “it is my time, I’m educated, I’m experienced. I have been serving people for a long time, bring me the presidency, it is my turn.” 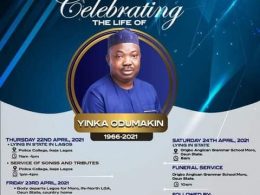 The family of the late activist and Afenifere spokesman, Comrade Yinka Odumakin, on Monday announced the order of his funeral rites.
byTayo Aderinola
1 share
1
0
0
No comments 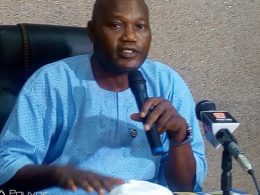 Hammed Idowu Tijani, the Chairman of Ojokoro Local Council Development Area of Lagos has promised to make roads in the LCDA motorable.
byLateef Idris
No comments 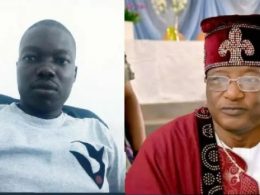 The Nigeria Police Force has charged the owner of Hilton Royal Hotel, Dr Ramon Adedoyin, and six others to an Abuja High Court over the circumstances surrounding the death of Timothy Adegoke, the MBA student of the Obafemi Awolowo University, who reportedly died at the hotel on November 6, 2021.
byTayo Aderinola
No comments

Winners have emerged at the grand finale of the Y2020 essay competition amongst students of Primary, Junior and…
byLateef Idris
No comments