The stalemate witnessed at the last week’s Federal Accounts Allocations Committee meeting have been reconciled, with the announcement of the sharing of about N581.566 billion to the Federal, States and Local Governments for February 2020.

This was contained in the communique issued by the Office of the Accountant General of the Federation on the behalf of the FAAC said the N581.566 billion comprised Statutory Revenue, Value Added Tax (VAT), Exchange Gain, and revenue from Forex Equalization Account.

The communique said the balance in the Excess Crude revenue Account (ECA) stood at about $72.221 million.

Details of the allocations showed gross statutory revenue for the month of February 2020 was about N466.058 billion.

Also, for the month, the gross revenue available from the VAT was about N99.552 billion as against N104.758 billion in the previous month, a decrease of N5.206 billion.

Exchange Gain yielded a total revenue of about N757 million, and revenue from Foreign exchange Equalization Account was about N15.199 billion.

A breakdown of the distribution showed that from the gross statutory revenue of N466.058 billion, the Federal Government received N214.915 billion, the State Governments N109.008 billion and the Local Government Councils N84.040 billion.

The Oil Producing States received N43.242 billion as 13 per cent derivation revenue and the Revenue Generating Agencies received N14.853 billion as the cost of collection.

Last Tuesday, the meeting of the Committee failed to reach a consensus on the amount to be shared for the month.

On Wednesday, the FAAC met in Abuja for the sharing of the statutory allocation of revenues between the three tiers of government for the month of February.

The meeting, attended by the Finance Commissioners and Accountants General of the 36 States of the Federation, their Federal Government counterparts and the Federal Capital Territory rejected the amount presented for sharing by the revenue-generating agencies.

Consequently, the meeting ended abruptly without a resolution. The Minister of Finance, Budget, and National Planning, Zainab Ahmed, who presided over the meeting was however mandated to take the matter before the National Economic Council (NEC) meeting for further deliberation and resolution.

Although the NEC meeting ended without any information about a decision on the matter, it was learned that the Minister was authorized to reconvene the FAAC for a second look at the revenue proposal in view of the poor revenue accrual from oil export, as a result of the impact of the coronavirus pandemic.

It was learned that during the meeting, representatives of the states had no option than to accept what was presented, despite that it was far below the benchmark revenue approved last year.

A special FAAC Committee had recommended in its report on the guidelines on transfers into and withdrawals from the accounts the minimum amount to be shared every month and the transfer to the excess crude oil account.

In the report, the committee recommended that any month where the net distributable revenues available for sharing by the federal, states and local governments from the Federation Account falls below N680 billion, funds should be withdrawn from the ECA to augment the shortfall to at least N680 billion.

On the other hand, where the net distributable revenue is between N680 billion and N730 billion, up to about N50 billion should be transferred into the ECA as saving.

Besides, if the net distributable revenue for the month is between N730 billion and N830 billion, the committee recommended that up to about N100 billion should be transferred to the ECA, or a minimum of N150 billion, if the figure is above N830 billion.

With oil revenues shrinking to the barest minimum following the impact of the coronavirus on oil exports, it was learned that what was presented for sharing by the Nigerian National Petroleum Corporation (NNPC) and other revenue agencies for sharing was far below their usual benchmark amount.

On Monday, as global markets continued to grapple with the negative impact of the coronavirus pandemic on the global economy, crude oil price crashed to about $25 per barrels, the lowest level in 16 years. 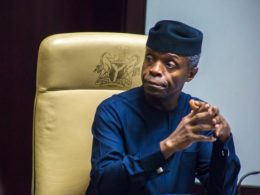 Vice President Yemi Osinbajo has denied calling for the devaluation of the naira due to the artificial low exchange rate.
byLateef Idris
No comments

The Ministry of Budget and National Planning, says the National Social Registry (NSR) is part of Federal Government’s…
byTayo Aderinola
No comments

Five suspected fraudsters who are specialists in using taxi cab to pick unsuspecting passengers around Lekki, Lagos and…
byTayo Aderinola
No comments

On the 19th of November 2020, 146 new confirmed cases and 2 deaths were recorded in Nigeria Till…
byTayo Aderinola
2 shares
2
0
0
No comments