The Department of State Services (DSS) has issued a 48 hours ultimatum to all stakeholders in the oil industry to resolve the ongoing fuel scarcity across the country.

The Department of State Services (DSS) has issued a 48 hours ultimatum to all stakeholders in the oil industry to resolve the ongoing fuel scarcity across the country.

The secret agency warned that it would launch a nationwide operation on saboteurs if there are still queues at various filling stations in the country after the ultimatum.
DSS spokesperson, Peter Afunanya, stated this shortly after the Director-General of DSS, Yusuf Magaji Bichi, met with major stakeholders in the oil industry at the agency headquarters in Abuja yesterday.

Afunanya said at the meeting, the DSS boss made it clear to the stakeholders that “enough is enough”, saying “we made it clear that whatever the hurdles are, they must be resolved, adding that Nigerians have every right to access fuel.”
He said the DSS decided to intervene in the matter because it has the mandate to investigate economic sabotage, including detecting and preventing threats to national security.

He said though the agency cannot link the current fuel scarcity to economic sabotage, it was ready to rise to the occasion to curtail the situation.
According to him, the agency told all parties involved that DSS won’t continue to tolerate the incessant fuel scarcity, adding that all of them must go beyond their best to ensure adequate supply of petrol across the country.

Afunanya said NNPCL has agreed to sell fuel at the official ex-depot price to all marketers nationwide. NNPCL also disclosed that it has sufficient stock of product, about 1.9 billion litres for distribution across the country even until after the Yuletide period.

“The question is if there is sufficient petroleum product, why the scarcity?” Afunanya queried.
According to him, other agreements reached were “NNPCL agreed to decentralise distribution of the product to all marketers.

“MOMAN and NNPCL from time to time will review the distribution chain to ensure that all bottlenecks concerning distribution are permanently resolved.

“There is an agreement that marketers will be operating for 24hrs on daily basis. The tankers also agreed that from now on all hands will be on deck to ensure lifting of the products.

IPMAN, Afunanya observed has also committed itself to ensure that the product is available for 24hrs daily.

“For we at the DSS, we agreed to provide adequate security for fuel distribution.

“Therefore, we insisted that the fuel distribution must improve and all challenges eliminated in 48hrs, and after 48hrs, we will as a matter of urgency carryout operations across the country. And in doing this, we won’t mind whose oars is gored”, he stated.

Noting that it won’t be business as usual, Afunanya said DSS commands and platform nationwide had been put on high alert, adding that “they are to get information on any element who want to obstruct these efforts.”

He advised Nigerians not to take laws into their hands, noting that the DSS had extracted commitment from the stakeholders that all issues will be resolved within the next 48hrs.

“The wellbeing of Nigeria is our interest. We have to prevent crimes. People should capitalise on this to cause trouble. Therefore we will not allow anyone to use this opportunity to cause mayhem”, he added.

The Minister of Information and Culture, Alhaji Lai Mohammed has clarified that the 500 million dollar loan being…
byTayo Aderinola
No comments 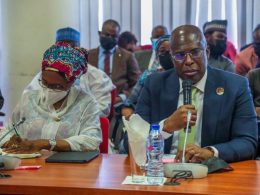 Nigeria’s Finance Minister Zainab Ahmed, on Monday said the Federal Government has suspended the plan to remove petrol subsidy by the end of the first of 2022.
byTayo Aderinola
No comments 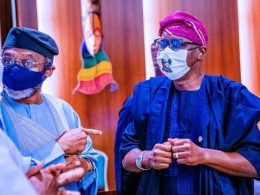 Governor Babajide Sanwo-Olu has won an endorsement for the way he has positioned Lagos State on the path of growth, despite the State being hit by inadvertent crises in the past year. The validation came from the Speaker of the House of Representatives, Rt. Hon. Femi Gbajabiamila, who extolled the competence and leadership style of the Governor.
byTayo Aderinola
No comments