A recall is the power of voters to unseat a serving lawmaker before the person’s tenure is up. A clause in our constitution spirited to check the latitude of elected law maker and as a constant reminder of the supremacy of the voter in a democratic dispensation. The unfolding debacle of Kogi State senator, Dino Melaye, has elicited curiosity amongst Nigerians about one of the most obscured but powerful constitutional instruments in Nigeria’s evolving democratic system.

A recall process that began with a few people queuing to etch their signatures in what initially seemed an ill-fated exercise on June 10, has now morphed into arguably the most keenly-watched political phenomenon three weeks later. This political gymnastics is upturning the political stature of a seemingly controversial kogi-born colossus.

On June 22, the Independent National Electoral Commission served a notice of recall proceedings on Mr. Melaye, ushering in the newest recall exercise in the country. This latest recall exercise signposts a determined move to activate the recall power of the electors.

On July 3, the electoral umpire unveiled a timetable of five critical dates for the recall process. The process continued despite Mr. Melaye’s attempts to block it from the court.

Although the provisions for recall are enumerated in the Constitution, ostensibly as tools for accountability, they are rarely tested by the electorate. This maybe  a true litmus test of the recall clause of the constitution because the narrative is a different paradigm but  there have been a few recall efforts in the past, no member of the parliament at the local or federal level has ever been recalled.

On August 28, 2005, a recall referendum conducted by INEC in Plateau State was unsuccessful as the incumbent retained his seat with 74 percent of the votes. Simon Lalong, then Speaker of Plateau State House of Assembly, had reportedly secured a court injunction against his recall, but INEC, under Maurice Iwu, went ahead with the exercise, anyway.

This gives Mr. Melaye hope that the outcome of a referendum, if conducted against him, might not end his mandate; but does not mean the process is, by any means, easy. Mr. Melaye apparently had this in mind when he first declared his recall process an exercise in futility a day after it began.

“He is shooting the moon and boxing the wind,” the senator said of Governor Yahaya Bello, his political rival whom he strongly believes is financing the recall campaign.

In a display of solidarity, Deputy Senate President, Ike Ekweremadu, assured his embattled colleague that his seat will remain intact.

“The recall process is dead on arrival going by the Constitution,” Mr. Ekweremadu said at the plenary Tuesday. “It’s a long process, after the verification of votes.”

Legality of the process…

Since there’s no constitutional question about whether a lawmaker could be recalled or not, it is proper  to examine the provisions of the Constitution and the Electoral Act as they apply to a recall exercise. This will surely put things in proper perspectives.

Practically, the procedures that apply to the recall of federal lawmakers are the same as those for members of a House of Assembly at the state level.

But Section 69 of the Constitution addressed recall for senators and members of the House of Representatives only, while another section dealt with a state-level recall. The process does not apply to elected executives, those can only be impeached.

From Section 69 of the Constitution:

(a) there is presented to the Chairman of the Independent National Electoral Commission a petition in that behalf signed by more than one-half of the persons registered to vote in that member’s constituency alleging their loss of confidence in that member; and

(b) the petition is thereafter, in a referendum conducted by the Independent National Electoral Commission within ninety days of the date of receipt of the petition, approved by a simple majority of the votes of the persons registered to vote in that member’s constituency.

Section 116 of the Electoral Act also dictated the same thing.

In Kogi, Mr. Melaye’s opponents said they’ve collated about 188, 588 signatures to recall him from Senate. The number represents roughly 52.3 percent of 360,098 registered voters, according to the News Agency of Nigeria.
The campaigners also said they ensured that all voters who signed the recall petition attached their respective voter’s cards to the document for proper and easier verification by electoral officers.

The Electoral Act advises that petitioners list offences against a target, but Mr. Melaye’s public image as perhaps the most controversial lawmaker in the Eighth Assembly makes it easy for his opponents to pin as many offences against him as they deem necessary.

Since INEC has announced some key dates in the exercise, it is no longer a question of whether the recall process would be exhausted but if Mr. Melaye can survive it.

A professor of Immunology, Dr Ganiyu Arinola, says the assumption that drinking hot water will wash Coronavirus from…
byTayo Aderinola
No comments 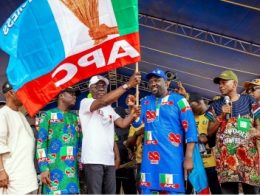 After the Yuletide break, All Progressives Congress (APC) in Lagos State returned to the campaign trail to drive support for the election of the party’s presidential candidate, Asiwaju Bola Ahmed Tinubu, and the re-election of Governor Babajide Sanwo-Olu.
byTayo Aderinola
No comments 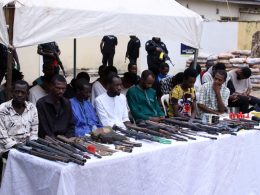 Operatives of the Force Intelligence Bureau Intelligence Response Team (FIB-IRT) have successfully brought to a close case of murder which seemed unsolved with the arrest of some notorious suspects involved in criminal conspiracy, culpable homicide, and kidnapping in June 2022. The arrest followed a charge on the tactical and operational squads by the Inspector-General of Police, IGP Usman Alkali Baba, psc(+), NPM, fdc, on the need to ensure cases are investigated to a justifiable and reasonable conclusion.
byLateef Idris
No comments

Wizkid honoured by Minnesota governor in U. S.

Award winning Artist, Wizkid, has been honoured in the United States by the governor of Minnesota, Mark Dayton.…
byTayo Aderinola
No comments