By Petur Hreinsson with Iceland

Iceland’s status as the underdog team has gradually been fading away after the team’s performances in recent years. The Vikings narrowly missed the chance to qualify for the FIFA World Cup™ in Brazil after a playoff loss against Croatia, but have since then qualified for two consecutive tournaments, the UEFA European Championship in 2016 and now Russia 2018, for which they topped their qualification group.

After Iceland’s draw against two-time World Cup winners Argentina, one might think that this tiny island in the North Atlantic is not an underdog any more, and will not be considered as such in its upcoming match against Nigeria, even though the latter country has 556 times the population of Iceland, and players that play in more well-known teams and leagues.

“We are not of the opinion that we are at all better than Nigeria. We know our strengths, and need to make the best of them,” Iceland coach Heimir Hallgrimsson told FIFA TV recently.

A question of possession
But even if this underdog reputation is fading away, how will Iceland cope with their new role? Will they take control of games, and look to keep possession? If we look at the team’s average possession in 26 competitive matches from 2014 to 2018, the Icelandic team has had 44 per cent possession on average, a little over 45 per cent when it wins and 47 per cent when it loses.

When Iceland suffered its biggest loss in nine years in a competitive match, going down 5-2 to France in the UEFA Euro quarter finals, it had 47 per cent possession, higher than its average over recent years. When the team has achieved its best results in recent times, against Argentina, England, Austria and Portugal, it averaged scarcely 27 per cent.

“We knew [Argentina] would have the possession, they have many of the best attacking players in the world. But we have a team that is at its best when we have the opposition in front of us, and we have clinical attacking players when we attack,” Icelandic keeper Hannes Halldorsson said after the draw against Argentina. “We were happy with that match. It was not a thundering offensive display, but we knew how the game would unfold and we were ready to defend for 90 minutes. The boys did that well.”

If the Icelanders want to get results against a highly talented Nigerian side on Friday in Volgograd, they have to stick to their game plan. Lie deep, close spaces, let the Nigerians keep most of the possession, and be clinical on the counter.

Coach Hallgrimsson elaborated on this strategy. “We look at everything with the mindset that we have found a formula that works for us today. And we try to get everybody to follow it. We’ve tried to find what kind of playing style, what kind of characteristics this Icelandic team needs to have, and what identity an Icelandic national player needs to have. And this is the way for Iceland to be successful.” 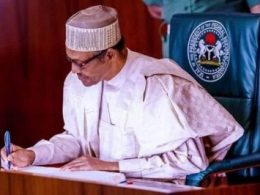 President Muhammadu Buhari on Monday in Abuja pledged his commitment to hand over a strong repositioned agriculture-led, diversified home-grown economy, stable democracy and revamped armed and security forces to the next Administration.
byTayo Aderinola
No comments