Former Vice-President Atiku Abubakar has been attacked for saying he has been sidelined by the Muhammadu Buhari administration.

He helped Buhari to get into office and got nothing in return, he has been quoted as saying.

Besides, he did not contribute “anything” to the campaign, he said.

Lawal, a director on the board of the Nigerian National Petroleum Corporation( NNPC), said Atiku remained bitter for losing the presidential ticket to Buhari.

But the Atiku Media Office insisted that the former Vice-President did his best for the campaign after being sidelined initially.

Lawal said: “We know that right from the time Buhari was sworn in, he started plotting to cause problem, to ensure that this administration does not succeed.

“During the campaign, he granted an interview to BBC and said he was sure APC would not win the presidential election.

“He was making preparations that if APC did not win, he will go back to PDP and get the ticket after ex-President Goodluck Jonathan’s projected exit in 2019.

“After the presidential election, he came to congratulate President Muhammadu Buhari and left the country. He is  complaining now  that he was not contacted.”

Atiku has said that he was “used and dumped”.

This, Lawal said Atiku was not right with his claim.

He added: “I served as a Deputy Director at the Presidential Campaign Council.

“ I knew all the intrigues. He fought Buhari tooth and nail. He was extremely unhappy about the loss of presidential primaries.

“ Let him say how much he spent. How much did he claim he spent? Is his money more important than his appearance at the campaign? He spent all the  money he thinks he has to ensure that Buhari did not win.

“People are not foolish. He told the BBC in 2015 that he was sure that Buhari was not going to win. So, will somebody who did not believe in the party’s candidate spend anything?”

He insisted that Buhari has been fair to Atiku.

“And out of magnanimity, Buhari’s first outing from Abuja, after winning the election, was to attend Atiku’s daughter’s wedding.

“There are many  Atiku loyalists in this government and he is saying that he has been sidelined.  She (Women Affairs Minister Aisha Alhassan) and other Atiku loyalists were given appointment because of him. They know themselves. And Atiku is saying nothing has been given to him. At least the principal appointment given to Atiku went to Aisha as the Minister of Women Affairs.

“To be candid with you, Atiku started fighting Buhari since 2015. They just came out now because they were choked up; they did not get any reaction from him. They thought he was  going to start fighting, abusing and dealing mercilessly with the opposition in government.”

On the comments of the Minister of Women Affairs, Lawal said she ought to have resigned her appointment.

“If she is the daughter of Atiku, as she is claiming; if she is Mama Taraba, as she claims to be, let her resign and go and work for Atiku. Atiku is free to contest; she is free to campaign for anybody.

“As for the President, he knew when she gave Aisha appointment that she is a political ally of Atiku and we were  not surprised.

“We are in government; we know about their machinations, meetings in order to discredit this government.  It started  after the primaries and shortly after   the victory of President Muhammadu Buhari. We know what they have been planning underground. Recently it choked them because the President refused to answer or react to all their mischiefs.”

Spokesman of the Atiku Media Office Mr. Paul Ibe, said yesterday that in spite of  Atiku not accorded the respect he deserved, the former Vice President worked “harder for Buhari’s victory.”

He said: “Lawal was not in the position to say that Atiku did not contribute to Buhari’s campaign. Those in the position knew what transpired. It is not the truth. I remember that I was a Deputy Director in the Presidential Campaign Council.

“The ex-Vice President contributed his resources, time, counsel, and ideas, including the media resources which played a crucial role. Even after the election, when the media team met with the President, he acknowledged the role of the media unit.

“After the election, Atiku Media Office became the temporary shelter for the presidential campaign media personnel.”

He added: “Atiku was not accorded the respect he deserves  as a major stakeholder during the campaign.

“He was not even aware of the campaign itinerary. If you didn’t invite a leader for campaign, will you expect him to be there?

”When they realised what was happening, the Director-General of the Presidential Campaign Council, Rt. Hon. Rotimi Amaechi, went to the former Vice President who said he was being excluded and there was a promise that they would not sideline him.

“By coincidence, we ( his aides) also went to meet with Atiku. We asked: ‘Are we to withdraw because you are being excluded,’ But Atiku told us: ‘You are on a historic national assignment; what you have started, you will finish.’

“So, after the meeting with Amaechi, the ex-VP went full blast into the campaign. He said he did it in the best interest of Nigeria. It is not about Atiku; it is about Nigeria.

“Everything Atiku said I stand by it.The ex-VP has not been plotting against this administration. He is a democrat who has been giving advice to make sure the government succeeds.”

President Muhammadu Buhari received brief from the Governor of Lagos State, Mr. Babajide Sanwo-Olu on update of the…
byTayo Aderinola
No comments 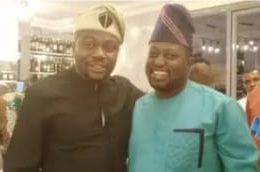 Over time, it is observed that the level of youth participation in Nigerian politics is low. The reasons cited include abysmal performance of successive governments, disinterest in governance by the youths themselves, and lack of inclusion among others. But no nation can grow without youth involvement.
byLateef Idris
No comments