A statement by the Nigeria Football Federation (NFF), the young businessman from Akwa Ibom, made the promise as he briefly greeted players and officials inside the chartered ARIK Bombadier CRJ 1000 aircraft just before take-off at the Ibom International Airport, Uyo on Sunday afternoon.

He said: “I am a good friend of the NFF President, Mr Amaju Pinnick, and I am happy that I am here in time to see you guys before take-off for Yaounde.”

“I watched the game against the Cameroonians here in Uyo on Friday and I am sure you have the ability to conquer them again in their own territory.”

Udofia, Chief Executive Officer of Desicorn Company, announced to the applause of players and officials that “I promise to reward you with 20,000 dollars for every goal scored in Yaounde.”

Three-time champions, Nigeria, will play Cameroon on Monday in Yaounde in a Day Four encounter of the 2018 FIFA World Cup Africa qualifying race with five points clear of second-placed Zambia and seven ahead of third-placed Cameroon.

Meanwhile, Amaju Pinnick, the President of NFF, has called for more passion and commitment from the Super Eagles as they prepare to take on Cameroon again on Monday.

The NFF in a statement on Sunday said the Nigerian delegation touched down at the Aeroport Nsimalen-Yaounde at about 1.27 p.m.

The NFF president and CAF Executive Committee member charged the players to approach Friday’s leg in Uyo with passion and to play with their heart, soul and spirit.

Following the charge, the players obliged with a near –incredible 4-0 bashing of reigning African champions Cameroon on the turf of Godswill Akpabio International Stadium.

Pinnick again urged the players not to take their feet off the pedal as the race to Russia continues apace on Monday at the Stade Omnisports Ahmadou Ahidjo.

He said “the Cameroonians will come at us with everything on Monday, knowing they have to get a result and with anger born out of their humiliation in Uyo.

“That is why we cannot afford to relax yet. On Monday, you must play with even greater passion and show even more spirit than you did in Uyo to come out with result here.

“The ticket to Russia from Africa Group B appears to be taking on the green-white-green colour already, but we must not relent. We must fight hard for every ball for the 90 minutes.”

On board the chartered ARIK Bombadier Jet CRJ 1000 that flew from Uyo and arrived in Yaounde after 55 minutes were 23 players and technical and backroom staff.

Some members of the NFF Management led by Deputy General Secretary Emmanuel Ikpeme, Akwa Ibom FA Chairman Emmanuel Iba, some football stakeholders and representatives of the media were also on board.

They were received on arrival by the Ambassador of Nigeria to Cameroon, Lawal Gashagar and NFF Executive Committee member Sharif Rabiu Inuwa (who was part of a three –man advance party).

Consul Olajide Ogunmadeji, Leader of Cameroon’s delegation to Nigeria for the first match Tado Oumarou and some officials of FECAFOOT were also on hand to receive the Nigerian delegation.

NAN reports that the Super Eagles and their officials are staying at the Hilton Honors Yaounde, with the team set to have the official training at the Stade Omnisports Ahmadou Ahidjo by 6 p.m. also on Sunday.

Director General of National Institute for Pharmaceutical Research and Development, NIPRD, Dr Peter Adigwe, has said that analysis carried out by his organisation on the Madagascar’s native formulation against the COVID-19 pandemic, did not show evidence of efficacy on the disease.
byTayo Aderinola
1 share
1
0
0
No comments 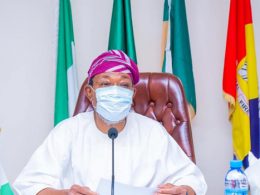 The Minister of Interior, Rauf Aregbesola, on Wednesday said the incessant attacks on correctional facilities in the country cannot force him to resign.
byLateef Idris
1 share
1
0
0
No comments 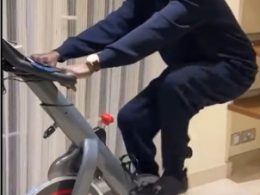 2023 Presidency: Tinubu is in the UK to rest – APC Campaign Council Member

The presidential candidate of the All Progressives Congress (APC) Bola Tinubu is in the United Kingdom to rest ahead of the campaign season.
byTayo Aderinola
No comments 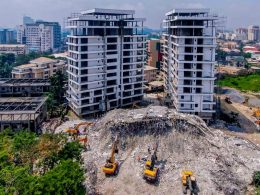 The death toll from the collapse of the 21-storey building at 20, Gerrard Road, Ikoyi Lagos State, has increased to 36.
byTayo Aderinola
1 share
1
0
0
No comments