President Muhammadu Buhari on Monday returned to Abuja after participating in the 35th Ordinary Session of Assembly of the African Union Heads of State and Government in Addis Ababa, Ethiopia.

President Muhammadu Buhari on Monday returned to Abuja after participating in the 35th Ordinary Session of Assembly of the African Union Heads of State and Government in Addis Ababa, Ethiopia.

The News Agency of Nigeria (NAN) reports that the Minister of the Federal Capital Territory (FCT), Malam Muhammad Bello, Inspector General of Police, Usman Baba, and Director-General of the Department of State Services, Yusuf Bichi, were among those who welcomed the president at the Presidential wing of the Nnamdi Azikiwe International Airport, Abuja.

While in Addis Ababa, the Nigerian leader, apart from participating fully in the 35th Ordinary Session of Assembly of the African Union Heads of State and Government, held various bilateral meetings with some African leaders.

The theme of the deliberation was: “Building Resilience in Nutrition and Food Security on the African Continent: Strengthen Agriculture, Accelerate the Human Capital, Social and Economic Development.’’

Buhari, who also met with Prime Minister Abiy Ahmed of Ethiopia, commended him for maintaining peace and unity in that country, and for ensuring fairness and justice in development.

The two leaders also agreed that African growth and development would require strong, visionary leadership that will cater for the needs of the people, and effectively strengthen institutions that encourage peaceful co-existence, while providing disincentives to conflicts and coups.

Buhari also received a comprehensive briefing on the coup attempt to oust President Umaru  Embalo of Guinea-Bissau, on the sidelines of the African Union Summit, on Sunday.

NAN reports that the coup was, however, aborted by loyal forces in that country.

The Nigerian leader met with Senior Minister and Minister of Foreign Affairs of Guinea-Bissau, Suzi Barbosa, who made a graphic presentation of the attempt to overthrow the constitutional order in her country. (NAN)

The Lagos State Commissioner for Health, Prof. Akin Abayomi, has attributed the reasons for the second wave of…
byLateef Idris
No comments 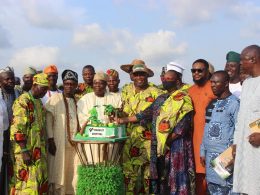 The Special Adviser to Lagos State Governor on Tourism, Arts and Culture, Mr. Solomon Bonu, has expressed the readiness of the State Government to vigorously market coconut plantations in Badagry as a viable means of boosting tourism and the coconut value chain in the State.
byLateef Idris
No comments

No Bra Day: All for a good cause? Or just a hoax?

Contrary to some of the opinions and display on social media, National No Bra Day is actually an…
byTayo Aderinola
No comments

Buhari to migrants : Stay at home, Nigeria will be better