However, Tinubu’s resolve to endorse Ambode was made possible with the interventions of Acting President, Prof. Yemi Osinbajo and the Oba of Lagos, Rilwan Akiolu, both of whom the governor allegedly asked to wade into the situation that hitherto threatened his re-election in 2019.

An authoritative source confirmed the development to Lagos Panorama at the weekend, noting that the two eminent Nigerians approached Tinubu at different times and prevailed on him to reconsider his stand on Ambode’s re-election, considering the larger implications.

The source noted that the APC leader yielded to the intervention of the vice president and the monarch out of respect for the two leaders.
This development regardless, the political class was still believed to be angry with the governor over alleged lack of respect and poor treatment of the people, who made it possible for Ambode to become governor in the first place.

The source said although Tinubu was displeased with the running of the government, he did not have any fundamental differences with the governor, the reason he yielded to the pleas to let Ambode return.
While the debate on Ambode’s fate in 2019 lasted, according to the source, Tinubu deliberately stayed above the fray because he did not want to get involved in the politics of conjectures about the governor’s re-election, more so that it might not be totally in his interest to do so, given the state of the party and government at the national level.

Another source hinted that one of the problems the governor had with Tinubu and many of the political leaders in the state was, because he wasn’t consulting on critical issues of state and had at a point, alienated everyone in the political class in the running of the state.

The source noted that while Tinubu had managed the situation with the best of political maturity, it didn’t take away the fact that he also had disagreement with Ambode over some of of his decisions and was displeased with the way the governor handled some critical issues.

“You’d agree that Asiwaju boasts an undeniable father figure and so, we cannot continue to attribute some of these petty politics to him. Yes, he may not be happy about certain things in the government, he really does not have any fundamental differences with the governor. That much I know. So, to your question, it is true there have been interventions and he is set to endorse him in order to put paid to some of these speculations,” the source said.

Fears that Ambode’s second term bid might have hit the rocks started to manifest significantly after the recent stakeholders meeting chaired by Tinubu himself at the party’s Lagos secretariat on Acme road, Ikeja. It is pertinent to state that the former Lagos State governor and Minister of Power, Works and Housing, Babatunde Fashola, went through similar re-election baptism with Tinubu, but many people in the state rose early in support and defence of Fashola, which forced Tinubu to yield and eventually endorsed Fashola.

Thus, a similar stakeholders’ meeting was organised during Fashola’s time and it was at the meeting that Tinubu laid to rest all the speculations surrounding his re-election by raising his hands and pronouncing his second term a fait accompli.

But much longer than it took Fashola to clinch his re-election ticket, Ambode’s is still battling to known his fate, not to talk of the fact that he has refused to openly endorse him for re-election at the stakeholders’ meeting, which held on Tuesday.

“He will give him the ticket. It is our oga’s way of raising the stakes. He did it to Fashola and when the stakes were resolved, he endorsed him. In Ambode’s case, the stakes have been raised and will be resolved. 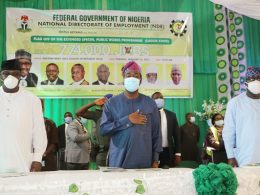 How 19 pregnant girls were rescued from baby factory in Lagos

The Police in Lagos State have uncovered a baby factory and rescued 19 pregnant girls, with two suspects…
byTayo Aderinola
No comments

The three killers of 22 year-old LASU Student, Favour Daley-Oladele, wasted her for nothing as their money making…
byTayo Aderinola
13 shares
13
0
0
No comments