Aretha Franklin, the music icon and legendary singer known as the “Queen of Soul” during a five-decade career died at home in Detroit on Thursday, her longtime publicist announced. She was 76.

Franklin, who influenced generations of female singers with unforgettable hits including “Respect” (1967), “Natural Woman” (1968) and “I Say a Little Prayer” (1968), died from advanced pancreatic cancer.

The multiple Grammy winner cemented her place in US music history with a powerful, bell-clear voice that stretched over four octaves. In a career crossing generations, her hits spanned soul and R&B, to gospel and pop.

Franklin passed away at 9:50 am (1350 GMT) surrounded by her family and loved ones, her family said in a statement issued by her publicist.

“It is with deep and profound sadness that we announce the passing of Aretha Louise Franklin, the Queen of Soul,” the statement said.

“In one of the darkest moments of our lives, we are not able to find the appropriate words to express the pain in our heart.

Franklin — who was widely known by only her first name, in true diva style — rose from singing gospel in her father’s church to regularly topping rhythm and blues and pop charts in the 1960s and 1970s

“We have lost the matriarch and rock of our family. The love she had for her children, grandchildren, nieces, nephews, and cousins knew no bounds.”

Funeral arrangements would be announced in the coming days, the family added, thanking fans around the world for their “incredible outpouring of love” since it first emerged earlier this week that she was gravely ill.

“We have felt your love for Aretha and it brings us comfort to know that her legacy will live on. As we grieve, we ask that you respect our privacy during this difficult time.”

Franklin was the first woman to be inducted into the Rock and Roll Hall of Fame in 1987. In 2010, Rolling Stone magazine put her at the top of its list of the 100 greatest singers of all time, male or female.

She sang at the inaugurations of presidents Bill Clinton and Barack Obama.

Clinton and his wife, former secretary of state Hillary Clinton, on Thursday paid tribute to Franklin as “one of America’s greatest national treasures.”

“For more than 50 years, she stirred our souls. She was elegant, graceful, and utterly uncompromising in her artistry,” the former first couple said.

“She will forever be the Queen of Soul and so much more to all who knew her personally and through her music. Our hearts go out to her family and her countless fans,” they added.

Singers and musicians quickly flooded social media in mourning her passing, which came on the same day that fellow US music giant Elvis Presley died at his home in Memphis, the city where Franklin was born, 41 years ago. 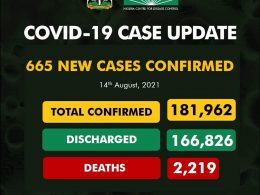 On the 14th of August 2021, 665 new confirmed cases and 8 deaths were recorded in Nigeria
byLateef Idris
No comments

Sanwo-Olu goes into self-isolation, after one of his close aides tested positive for COVID-19 – Prof Abayomi

Lagos State Governor, Mr. Babajide Sanwo-Olu will go into self-isolation immediately, after one of his close aides tested…
byTayo Aderinola
No comments 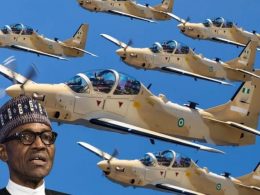 The war against insurgency in the country will be revved up soon with the expected arrival of six Super Tucano light attack aircraft from the United States (U.S.) mid-July.
byLateef Idris
No comments